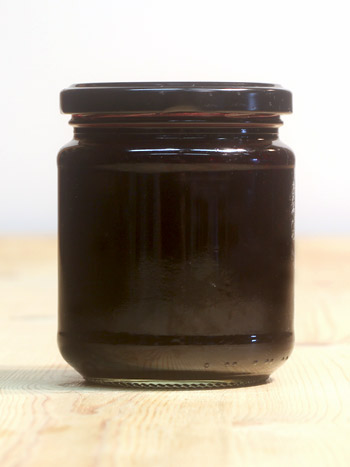 This blackcurrant jam recipe is simple and can be done without any specialist equipment. The recipe comes from Mrs Beeton in 1861, and you will be surprised at just how easy it is to make; there is no need to stand stirring and boiling the life out of the fruit for hours on end, this can be made up in less than an hour and then you will have a wonderful jam to last you for 6 months. This is perhaps the best tasting of all the jams, and is certainly a favourite of ours – as a note Blackcurrants are ripe to pick in July, and should be picked on a dry day.

This Black currant jam is a very luxuriant jam, beautifully delicious on fresh bread, and you don’t have to worry about over cooking the fruit, in fact if the fruit is under-ripe, and a little hard, it needs to be boiled a little longer, and some recipes swear by the addition of a little butter (100g) to the preserving pan to soften them in the boil.

If you prefer a Blackcurrant ‘jelly’ to a jam, (without the ‘bits’) simmer the fruit and water without the sugar first, after 30 minutes, when the fruit is tender, mash the fruit with a ‘potato masher’ and then fully strain through a fine sieve to remove the skin and pips. Making Jams Masterclass.

Many recipes just say ‘boil until the jam sets when tried or tested’ experienced jam makers know exactly what this means: Spoon a little of the boiled preserve on to a cold plate, (chilled in the fridge) leave to cool for one minute, then push the preserve with a finger, if it has reached the setting point the top of the preserve should wrinkle with a skin. Using a thermometer: Most jams and marmalade’s reach a setting point once they have been boiled at 105C / 220F for 10 to 15 minutes.

1530. INGREDIENTS – To every lb. of fruit, weighed before being stripped from the stalks, allow 3/4 lb. of loaf sugar, 1 gill of water.

Mode.—Let the fruit be very ripe, and gathered on a dry day. Strip it from the stalks, and put it into a preserving-pan, with a gill of water to each lb. of fruit; boil these together for 10 minutes; then add the sugar, and boil the jam again for 30 minutes, reckoning from the time when the jam simmers equally all over, or longer, should it not appear to set nicely when a little is poured on to a plate. Keep stirring it to prevent it from burning, carefully remove all the scum, and when done, pour it into pots. Let it cool, cover the top of the jam with oiled paper, and the top of the jars with a piece of tissue-paper brushed over on both sides with the white of an egg: this, when cold, forms a hard stiff cover, and perfectly excludes the air. Great attention must be paid to the stirring of this jam, as it is very liable to burn, on account of the thickness of the juice.

The amount of jam this recipe will make will depend on several key things, how ripe and juicy the fruit is, how much water you evaporate out at the boiling stage and whether or not you strain the pips and skin out etc. But you should end up with around 2 litres of jam (give or take).

Strip the black currants away from the stalks, if you have picked them, and rinse in clean water. Add the blackcurrants to a preserving pan (jam pan) or a tall, heavy-bottomed stainless steel saucepan with the water (if the blackcurrants are hard then add in a little butter). Gently bring up to the boil, then remove from the heat.

Add the sugar, stir to dissolve, and then put back onto the heat, and once more bring up to the boil. Simmer just under the boil for 30 minutes on a medium heat. During this time occasionally stir to make sure the jam does not stick to the bottom of the pan and burn. Occasionally skim the top for impurities and foam with a spoon.

After thirty minutes of simmering bring the jam up to a rapid ‘hard’ rolling boil for 10 minutes, to reduce the moisture content and thicken. After 10 minutes test the blackcurrant jam’s setting point by using a cold plate, (as described above) or by checking that it has boiled for at least 10 minutes over 105C or 220F. Once at the setting stage pour into sterilized jam jars and seal. Store in a dark, cool place; the jam will last over 6 months to a year.