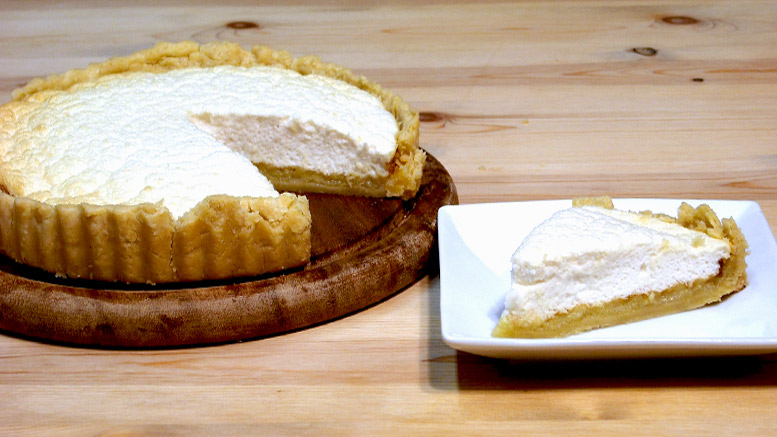 Chester Pudding is a very early (Victorian) and regional version of a Lemon Meringue Pie, baked in a shallow tart dish. It is very quick and easy to make and it should be served slightly warm for friends and family on a golden evening in Summer. Unlike a Lemon Meringue Pie, a Chester Pudding tastes ‘eggy’, with bright lemon and subtle almonds, which is very nice and satisfying. However, it needs to be served soon after baking, as the softer egg white topping will shrink about 5% from the edges of the pastry crust as it cools.

The edge of the pastry crust in a Chester Pudding, from using both lard and butter, is incredibly ‘short’ and crumbly, unlike a pure buttery pastry crust. This is very nice to eat, but it does make a lot of crumbs; while the base of the pastry is softer and more moist, kept so by the lemon filling, while eating the egg-white topping is like eating a lovely and warm eggy-almondy cloud. The region this pudding is most associated with, and where it gets its name, is Cheshire, known archaically as the County of Chester, near the borders of North Wales.

Making the pastry: Sieve the flour into a mixing bowl, add the softened butter and lard (cut into small dice) and rub between your fingers until you make the flour resemble fine breadcrumbs. Add the water, a little at a time until the flour and fats combine into a pastry, knead gently in the hands until everything is mixed and the pastry is silky. Leave the pastry covered in the fridge for 15 minutes. Roll out the pastry and line a tart tin with it, using the edge of the tin to trim off the pastry overhang.

Make the filling: Separate the yolks from the whites into two medium sized mixing bowls. Into the yolks add the sugar, softened butter and the juice and zest of one lemon. Use a whisk to to whisk everything together until creamy and light.

Put a small saucepan, with a few inches of water, on to boil. Place the bowl with the egg yolks, butter and lemon juice over the steam (make sure it does not touch the water). Keep whisking gently for a few minutes until the mixture thickens.

Making The Lemon Eggy Base For The Chester Pudding

Pour this thickened mixture into the pastry case and bake in the oven for 20-25 minutes at 200C. Take out of the oven after 25 minutes.

While the pudding was baking whisk the egg whites until white, silky and thick, (which might take over 5 minutes of continuous whipping) half way through add in half the ground almonds and towards the end add in the other half. Pour this stiffened egg white and almond mixture over the pudding (after it has already had the initial 25 minutes of baking in the oven) and return to the oven for a further 10 to 15 minutes to brown and cook the stiffened egg-whites.

Bake The Stiffened Egg Whites On The Chester Pudding

Once the egg white and ground almond topping top has become golden brown remove from the oven and allow to cool. Serve warm soon after.