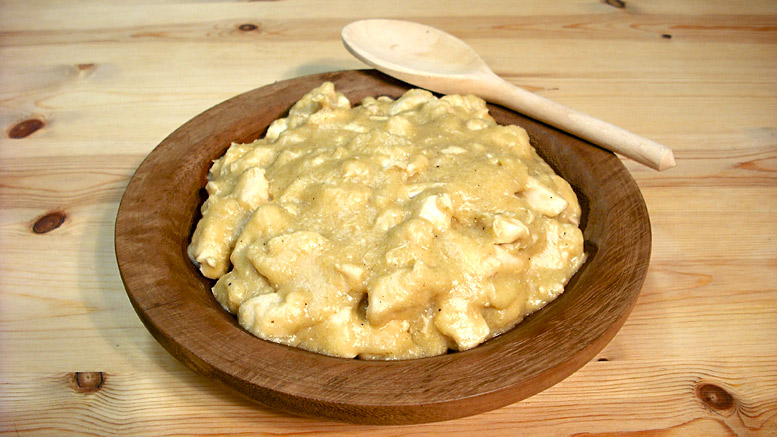 A Medieval Dish - Chykonys In Bruette

Chicken In Bruette (or Bruet) is a medieval broth or meat cooked in a broth, (but do note it is generally thicker than a normal broth) in this case it is a chicken and ale broth from 1430 A.D. thickened by breadcrumbs. This is great as a side dish to a platter of roast meats etc. and it is very easy to prepare, with a lot of the ‘smyte hem to gobettys’ work already done for us at the butchers. In a medieval feast several of these types of dishes would be placed at the table at once (within a course) and would be served with wooden spoons on to the trencher, (a bread plate).

The idea of having several dishes at once on a table to choose from, to ‘try a little bit of this and a little bit of that’ stays with us even today when we cook a large dinner or feast, and the numerous dishes and side-dishes which fill the table, particularly around Easter, Christmas and Thanks-giving. This Bruette would certainly be a great addition to those occasions, the yellow-golden colour from the saffron really enhancing the look of it. The recipe comes from ‘Two-Fifteenth-Century Cookery-Books’ – the title of which comes from combining two unnamed medieval manuscripts, Harleian MSS. 279 and 4016, kept in the British Museum, and dated 1430 and 1450 AD.

Tasting Notes: Considering that there are only a few ingredients in it, this dish packs a little bit of a punch; you can certainly taste the pepper, ginger and chicken in it. I would serve this very much as a side dish, going well as a spoonful on a plate with a slice of warm pie, such as a medieval Venyson Y-Bake, or with a platter of roast meats etc. The taste of the Bruette ends on a very subtle ale note, but it is initially fiery …

Notes: The quote ‘Smyte hem to gobettys’ means we can take an easy route in the modern day and age and just buy chicken breasts which have already been smyted from the chicken. The ‘self broth’ is a fresh stock, or a salted water, used to par boil the meat. It is important to grind our own black peppercorns – by adding fresh ground black pepper this will add a real depth of flavour to the bruette. Choose a good ale for this broth.

Ingredients For Chykonys In Bruette

If using stale slices of bread, cut all the crusts off and chop the bread up fine into breadcrumbs. Then dice the chicken breasts small.

In a large saucepan add the chicken pieces, with the chicken stock and ale, bring to a simmer, just under the boil for thirty minutes (skim the surface for any impurities which rise over the first ten minutes) or until chicken is cooked through and tender. After 30 minutes remove from heat. 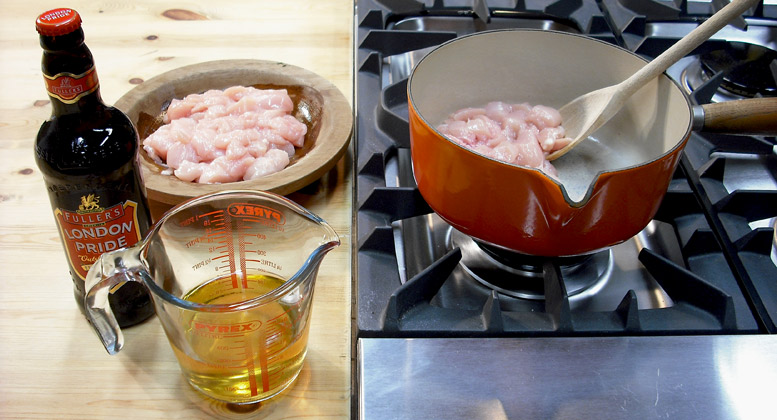 Brown The Meat Off

In a small dish or cup add a tablespoon of warm water and the saffron. Let the saffron infuse and colour the warm water. Grind the whole black peppercorns in a pestle and mortar to a fine powder.

Use a slotted spoon to remove the chicken pieces from the broth, cover and reserve in a small bowl. Then strain the cooked broth through a fine sieve until clear into a jug or bowl below.

Wash the saucepan clear with a little water then put the clear broth back onto a medium heat. Add the spices, saffron (and saffron water), seasoning and gently simmer for thirty minutes. 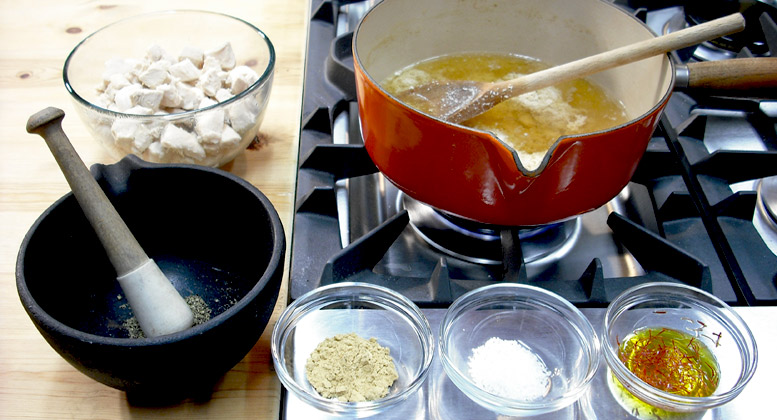 Bring The Broth Together - Add The Spices And Saffron

After thirty minutes stir in the bread crumbs, and very gently simmer, stirring occasionally to break up any lumps in the breadcrumbs, for about ten minutes so that the broth thickens. Then add the chicken pieces back in, and heat through. Once thickened remove from the heat, stir and spoon into a serving bowl.