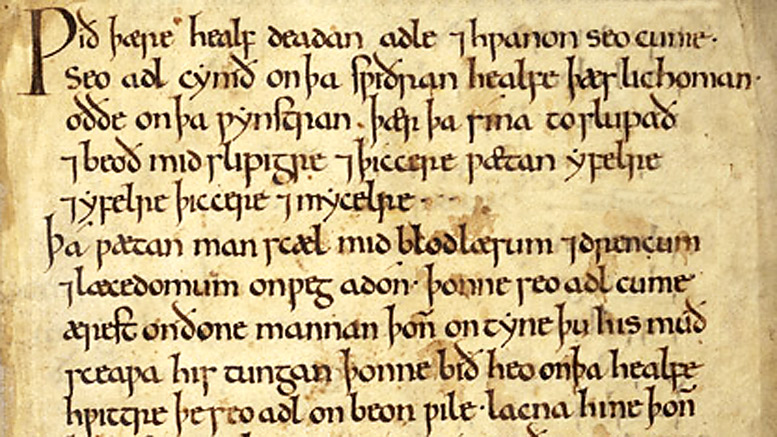 There are no British or Irish “cook books” earlier than the fourteenth century, (The Forme Of Cury c.1390 A.D. was the first). So, actually ‘The Dark-Ages’, is quite an apt description for a food historian. The major written sources of this period (before 1066 A.D.) tell us remarkably little about the types of food and the eating habits of those in the lower reaches of society in Anglo-Saxon England. That does not mean to say that there are no records, it is just that the extant written sources, the archaeological evidence, and the anthropological records, all have to be very carefully considered in order to make some sense of the Anglo-Saxon diet.

Having read most of the surviving accounts, it must also be admitted that Anglo-Saxon authors, writing in Old-English, were just not that interested in what was eaten, but rather in how it was eaten; the literature which has survived mainly uses the symbolism of food and drink to explain the social hierarchy and customs of the day – which can be clearly seen in such works as the Anglo-Saxon poem Beowulf for example (see the end of this post).

And at this point it is worth clarifying animportant issue: any ‘recipe book’ (or online sources) purporting to have Anglo-Saxon recipes is doing it from a ‘best guess’ standpoint, or more generously, an educated deduction, (we ourselves at Oakden are doing exactly this). Recorded recipes of every day food simply do not exist until the Medieval period, when we move from a society based on an oral tradition to a written tradition.

Typical Foods In The Anglo-Saxon Period

However, what we do have are Old English medical writings by physicians of the day. These documents contain not only ingredient lists for medicines, but, most importantly for us, also several recommendations for their patients diet and some suggested ‘medical recipes’ which they should follow. The most typical recipes of the period are the ‘briw‘, a kind of soup, broth or stew.

Bald’s Leechbook, II.1 and II.2, (Cockayne Manuscript II, pp.264 and 254.) tells us: “… ‘foods that have a cooling and strengthening virtues, such as apples, not too sweet at all, but sour-sweet, and pears and peaches, and bread put in cold water or hot … or the meat of small animals and little birds boiled and roasted, and various kinds of apples, pears and medlars, peas thinned down and boiled in water and in vinegar, or in wine, good and sweet.'” [The Leechbook of Bald is an Old English medical text probably compiled in the ninth-century, possibly under the influence of Alfred the Great’s educational reforms].

There are other suggestions and recipes mentioned in the same text … broths of mint and carrot [or parsnips] and ginger, peas and cumin … broths of juicy peas and beaten eggs, with bread crumbled in … broths of shelled winkles with peas, [and] with oxymel (vinegar and honey) … bread placed in hot water. Even suggestions for … scrambled eggs with butter beaten in and fried in oil (like an omelette) … or clean new butter and new barley meal or oats made into a briw. Bread, being mentioned many times, would have played a major part of the Anglo-Saxon diet – both leavened and unleavened. While lard, and other animal fats, are also mentioned, indicating the central role livestock had in Anglo-Saxon life – much of the live stock was killed in the ‘blood-month’ of November, to eat and store (salted) food over winter – the remaining herd or flock survived through the winter with small stores of grain – meat would have been more plentiful in these months than others.

All these recipes prescribed by physicians can easily be imagined as a slightly more seasoned and rich dish with meat and fish added and these would have been the staple foods of the Anglo-Saxon era. Particularly in the light of the way the descriptions were written down in manuscript form, with ingredients of recipes running into each other, and with some suggestions ending with a phrase that gives licence to the reader to modify them to taste, ” … make into a briw together as cooks know how“. This phrase used by Bald makes it clear that these were very common methods of cooking, widely known to Anglo-Saxon cooks, so common that he felt no need to write them down.

We also have surviving accounts of food served at an Anglo-Saxon funeral, and from this we can determine that bread, bacon, cheese, milk and fish were also parts of the diet, although being worthy of mentioning and costing out at a funeral suggests that these food stuffs were probably expensive and not always common among the poorest. Honey was the only way of sweetening dishes in Anglo-Saxon times, and frequently appears in the records as payment for rent., but was probably most often used in the production of mead.

Spices and seasoning (both fresh and dried) were widely used, with pepper being of particular importance as an expensive ingredient, (pepper was one of the luxury items that the Venerable Bede gave away on his deathbed). Cumin we know was used to flavour a warming broth, as did coriander, ginger, cinnamon and bay leaf, and mustard we know was also being grown in England in Anglo-Saxon times, but evidence of its use as an ingredient only starts in the medieval period.

Finally we have salt, a precious traded commodity reaching all areas of Anglo-Saxon England from coastal production and from salt springs in Worcestershire and Cheshire. Salt being vital in food preservation, as in salt cod, and in the seasoning of dishes. Many of the very high class pottery fragments found in Anglo-Saxon archaeological digs (from broken jars) probably contained and stored the expensive seasoning salt.

Objects found in pagan graves suggest that most men and women would have their own set of fire steels, flints and tinder boxes, to start a fire in order to keep warm and to cook on. In terms of cooking in the home a simple hearth was often lined with clay tiles or stones (dependant on what was easily available) and this was placed at the centre, or heart, of each house. Commonly this would take the shape of a fire pit in the centre of the room, where smoke from the burning fuel would escape through a hole in the roof, or just out through the porous thatch (this is very similar to simple cooking fires still seen in many homes in developing countries today). 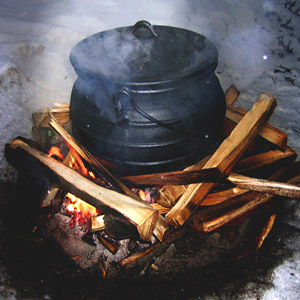 Cooking A Briw (Broth) In A Pot

Another way of heating food in Anglo-Saxon homes was to use heated stones (heated on the fire). These were dropped in pots of water or broth to boil it or reduce the cooking times by pre-heating – typically this would be a soup or broth (briw). In more grand homesteads, and larger settlements, large brick ovens for cooking and baking would often have been located in a separate building – these brick ovens would have burnt wood faggots, reaching very high temperatures, and in some of these ovens there was a dual system introduced, consisting of a chamber for the fire with flues to carry hot air to another chamber where the food was cooked.

When the Anglo-Saxons were on the move, an encamped army for example, an earth oven was fashioned. This was created from a pit dug in the earth where on top of glowing embers (of a once hot fire) stones would then be laid on top. Animal meat, either brought along, caught or hunted, which had been covered with clay and leaves (to stop the meat from burning and to keep it clean) were then laid in the pit on the hot stones and the food was then covered over with more hot stones, and finally earth or the removed sod packed on top – this is a very efficient way of cooking in the field.

Pots and Cauldrons (the most common cooking method in Anglo-Saxon England) to cook the food in were made from such metals as iron, bronze, copper and tin – clay pots were still used in many homes, but carved out soapstone cookware was becoming more popular, as it was tougher and easier to clean. In terms of baking, in smaller-poorer households, bread and other baked food items were baked in a pan with a lid, (over or near a fire) or under an upturned pot, upon special hearth stones (bakestones) or later in small brick ovens.