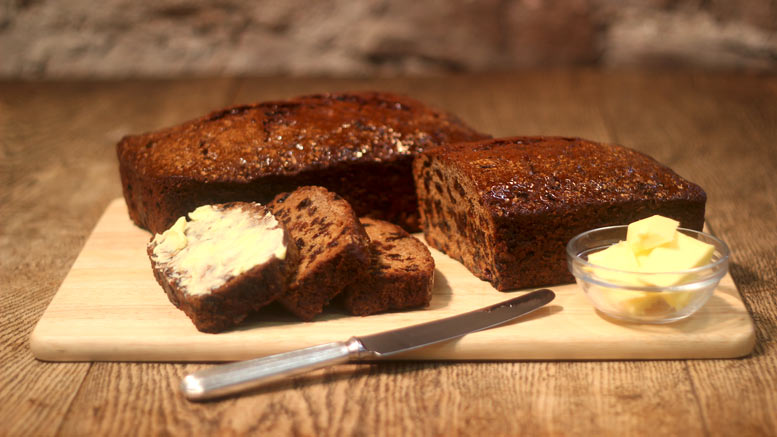 This traditional Irish family recipe given below comes from Winifred Abbe, Co. Offaly, Ireland. In 1971 she said, “My grandmother (late 1800s) used half tea and half whiskey, which made her bracks very popular with the gentleman”. In Ireland Tea Braks after baking were cut and the slices (often buttered) were ostensibly an afternoon cake for guests, or was something to eat after the main evening meal with the family. In the 1800s and 1900s very often several Tea Brack’s were baked at once, and when stored they lasted the whole week; the dried fruit and whiskey (if used) helping preserve them. Tea Braks are also excellent when they are a few days old if toasted and then spread with a little butter. You can also make the older Irish variation of a tea brack, a Barmbrack, which uses yeast to make it rise.

If using Whiskey – reduce the amount of tea

Ingredients For A Traditional Tea Brack

The next day (preferable) – or 2 hours later

Soak The Fruit & Then Make The Batter

In a large mixing bowl sift in the plain flour, baking powder, sugar and ground mixed spice – mix thoroughly. Tip in the soaked dried fruit and any liquid left in the bowl – mix with a wooden spoon. Then add in the beaten eggs and stir to mix everything together, then leave for a few minutes. The cake batter should just be slightly wetter than a ‘dropping’ consistency i.e. the batter will easily drop off the spoon when tilted upright – adjust with extra water (if too dry) or extra flour (if too wet).

Preheat the oven to 160C and grease 2 large loaf tins with butter.

Pour equal amounts of the Tea Brack mixture into the two large loaf tins. Make sure the batter only comes up two-thirds of the way to allow for expansion during baking. Use a spoon and stir the batter mixture in the loaf tins to get rid of any air pockets and to bring any dried fruit which sunk during pouring off the bottom, so that it is mixed evenly throughout the cake batter.

Bake these loaf tins in the oven for 70 to 90 minutes at 160C. Test after 70 minutes to see if the braks are done by pushing a metal skewer into the centre to see if they come out clean and hot. If the braks need longer cover the tops with some foil to stop the braks from browning too fast.

Once baked remove from the oven, after 20 minutes of cooling turn them out of the tins to cool further on a cake rack. While the bracks are still warm brush over some runny honey and allow to further cool before slicing into and serving. You can drizzle over some extra whisky (2 tbsp per cake) to soak in before coating in honey if you plan on ageing the Tea Brack’s, or want extra flavour from the whiskey – although this is entirely optional: once the cake batter is baked the whiskey flavour is muted and very well balanced with the fruit.

Tea Brack can be served as slices on their own or with some good quality butter (Irish if possible). These Tea Brack’s can easily last several days, and improve in flavour, if kept stored in an air tight container.

The quantities make three loaves for tin size 8in by 4in and 3in high. Soak the fruit and sugar in the tea/whiskey overnight. The next day add the flour and beaten eggs, mix. Finally add the baking powder and if a spiced brack is liked, add the mixed spice. Turn into three greased loaf tins and bake for one and a half hours in a moderate oven. When cool brush the top with melted honey to give it a fine glaze.