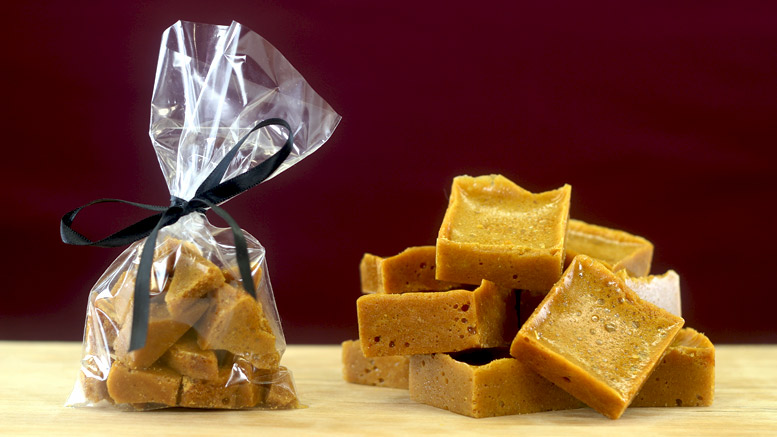 Yellowman (or Yellaman or Yellow Man) is a traditional Irish toffee, yellow-golden in colour and brittle (often referred to as honeycomb candy or sponge toffee). It is authentically made in big blocks from which small pieces are hammered off and served in small paper cone cups. Yellowman is still sold and served at the ‘Auld Lammas Fair’s’ up and down the country in Ireland; the most famous of which is held in Ballycastle in Co. Antrim, believed to be one of the oldest Fair’s held in Ireland; which falls on the last Monday and Tuesday of August each year, and has done so since the 1600s. “Did you treat your Mary Ann to some dulse and yellowman at the old Lammas Fair at Ballycastle, O?” (trad. Irish rhyme). The English version from Cornwall is called Hokey Pokey.

The Yellowman will acquire its unique bubbly and crunchy consistency due to the reaction of the vinegar with the baking soda. The more you rapidly stir it when it is bubbling, from adding in the bicarbonate of soda, the more it will bubble and the more air will be trapped when it cools, and the lighter your Yellowman will be. So you need a very tall saucepan to allow for this rapid expansion, (it expands perhaps as much as 5 times the initial volume) as well as to safely get the golden syrup and sugar on to a rolling boil before adding in the bicarb. We always use a much taller saucepan (stainless steel) than is necessary, for safety (the temperatures of melted sugars reaching the hard crack stage are very hot) and it also stops splashes when it is vigorously bubbling.

The most common mistake when making Yellowman is not getting the golden syrup and sugar mixture to reach the ‘hard-crack’ stage (160C or 300F) – the temperature at which boiled sugar becomes brittle when cooled – put the mixture onto a rolling boil long enough so that any drops of the mixture dropped into cold water will form a ball and when you squeeze the ball it is hard and brittle and not soft, if it is still soft it is still at the ‘soft-crack’ stage. Be careful though, much higher than the hard-crack stage and the mixture will burn and you will get a burnt taste in the toffee.

Also there is a balancing act when you add the bicarbonate of soda in, you want to thoroughly mix the bicarb into the sugar and syrup mixture, (after adding in the vinegar) but you do not want it left too long in the very hot pan, as the bicarb will discolour the mixture to a dark golden colour the longer it is left. We are after a lovely yellow colour on the top and bottom and a darker golden centre. A small amount of heavier mixture will be left over in the saucepan from pouring the mixture into the tin, you can pour this off somewhere separately as this will be a much denser toffee created.

makes about 16 portions, each one enough for one person. 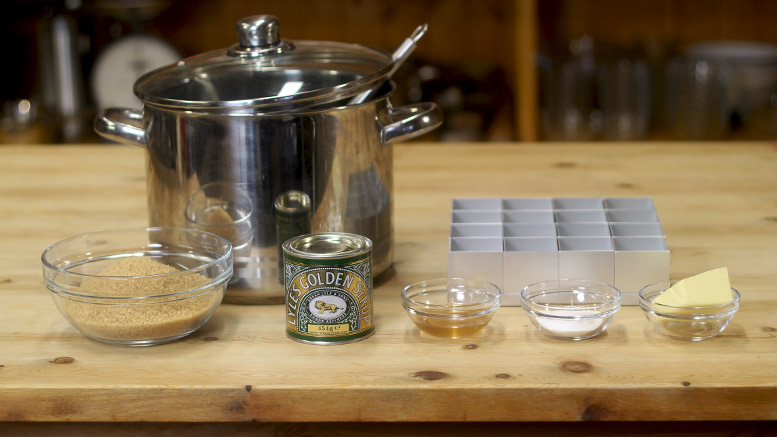 Ingredients For A Traditional Yellowman

Grease the cooling tins you are going to use lightly with butter. We are using small square cake tins, to make a good sized individual portion, but one large tin from which pieces are broken off a slab are also fine and traditional.

In a very tall non-stick saucepan melt the butter. Add the brown sugar, stir, then add the golden syrup to the saucepan. Gently boil the mixture on a medium heat for a few minutes, stir until all the sugar has dissolved.

After everything has dissolved turn the temperature up under the saucepan and put the mixture on to a rolling boil – stir occasionally as it comes up to the boil. You need to be careful the mixture does not catch and burn, (if it starts to catch turn down the heat a fraction and stir). 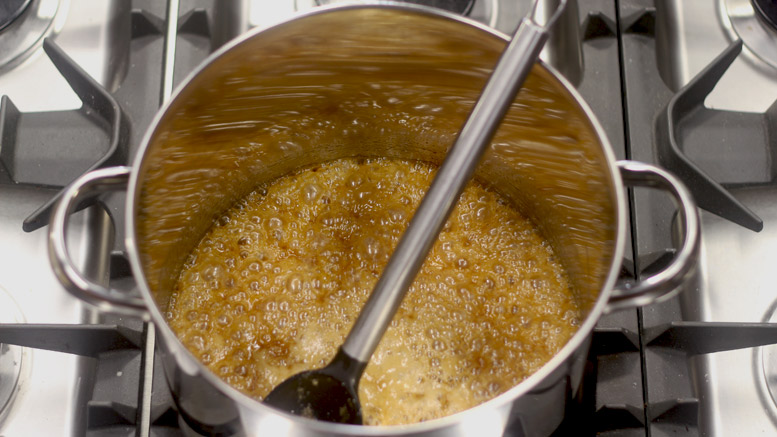 Yellowman - Boiling The Sugars Up To A 'Hard Crack' Stage

To know it is reaching the hard crack stage you are looking for thousands of tiny bubbles across the surface and the mixture to visibly thicken, and also darken slightly – it starts to look like a thick toffee froth. Stir occasionally and keep it at this stage for about two minutes. After two minutes use a thermometer or test the mixture by dropping a small amount into a glass of cold water. When the mixture can turn into a ball on contact with the cold water, and be brittle, remove the pan from the heat.

Once the pan is removed from the heat allow to cool for two or three minutes – then add the white wine vinegar carefully, (this will spit as a cold liquid is being poured onto a boiling one) stir it in, then quickly add the bicarbonate of soda and stir the mixture rapidly. Expect the Yellowman to vigorously froth up, tripling in size, and turn bright yellow.

Pour this frothy mixture into a greased tin and allow to harden. If you did not boil the yellow man mixture enough to reach the ‘hard-crack’ before putting in the bicarb it will slowly sink and collapse as it cools, and you will need to start again. 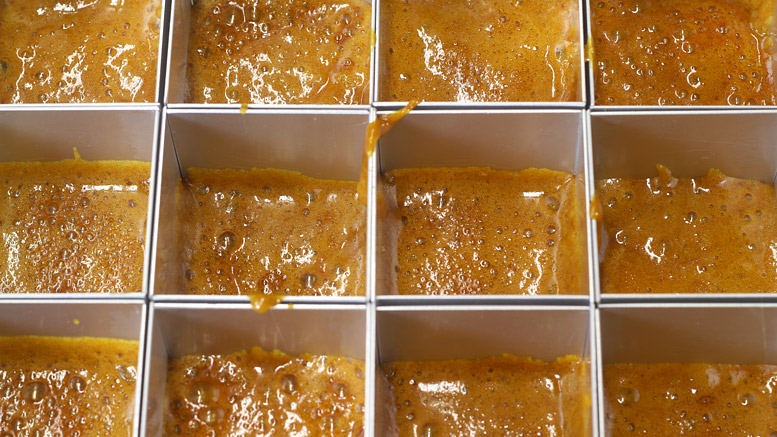 As the Yellowman toffee cools it will sink a little but you should see it retain the bubbles and the texture of sponge toffee.

Tip: after about twenty minutes use a palette knife to lightly curl the edges of the toffee down, to make a square slab when it is removed from the tin. This needs to be done when the Yellowman is still warm and flexible. As it cools it will become more brittle. Some people like to make Yellowman toffee spreading it out on a much larger tray, and make it not so deep.

Yellowman or Yellaman toffee is best eaten fresh. Cut into square slabs, small chunks, or traditionally take a clean hammer to it and smash small rock sized pieces off. If giving out to people (at Halloween parties, at Lammas etc.) make up some small paper cone cups and fill them full of the delicious Yellowman rubble (broken up by the hammer) and perhaps add a drizzle of melted chocolate. Yellowman can be eaten within five days if stored in an airtight container, but after the first day it will start to soften and loose its brittleness – so it is best eaten on the day it is made. 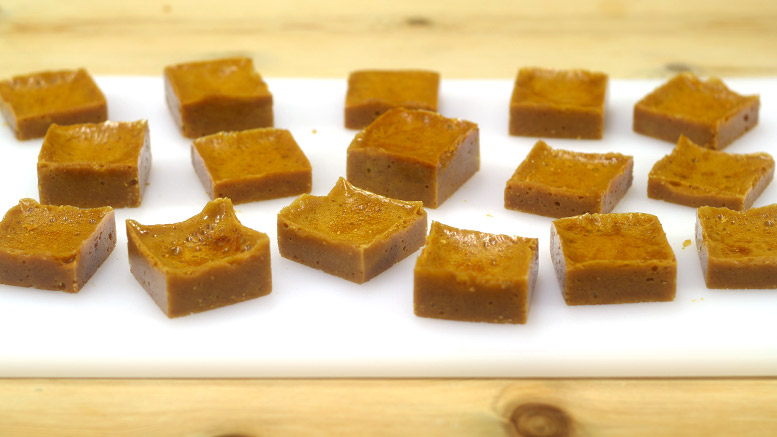 While Yellowman is a speciality of Ireland, traditionally sold at Lammas, it was also made in some areas of Ireland on All Hallows Even’ (Halloween) and All Souls’ Day. Since the 1950’s Yellowman has also been served with a drizzle of melted chocolate over it, (from family members recollections) and as a Halloween treat this would be recommended. Both bicarbonate of soda and golden syrup (corn syrup) were developed and manufactured for use in baking since the late 1800’s, and Yellowman, as a distinct type of toffee, was made soon after. Earlier types of ‘pulled’ toffee would have been sold before this time.

“Traditionally, the yellowman makers, who jealously guarded treasured family recipes, arrived at the Lammas fair carrying huge rocks of the pale toffee … set up their stall, hammered off golden nuggets of yellowman and packed them into paper cornets for the throngs of children who eagerly handed over their saved pennies” Regina Sexton, ‘A Little History of Irish Food’, 1998.

From ‘A Taste Of Ireland’, by Theodora Fitzgibbon, published 1968

Melt the butter and run it round the pan. Then add the sugar, syrup and vinegar. Stir until sugar and all ingredients are melted. Boil without stirring until a little of the toffee becomes crisp and brittle if put in cold water. Then add the baking soda, which will make it foam up; stir again, then pour on to a greased slab or large dish. Turn edges to the centre, and pull the toffee when cool enough. Pull until it is pale yellow in colour. It can be poured into a greased tin and cut into squares if preferred.