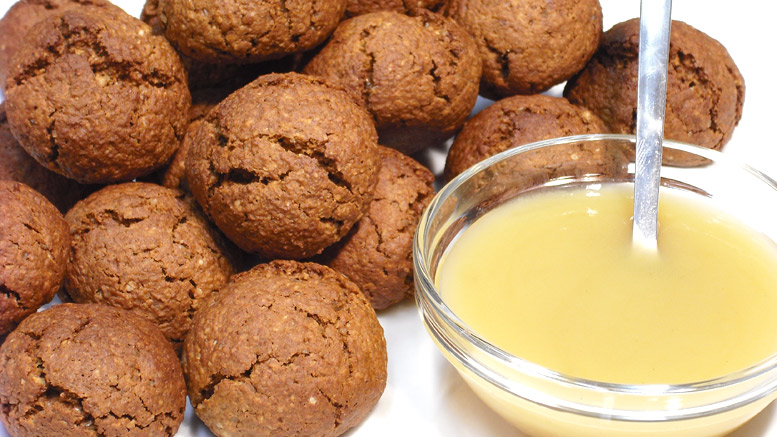 These small Aberdeenshire Parkin’s taste great, like a better tasting modern breakfast oat bar you can buy in the supermarkets – the ginger and cinnamon compliment one another, and being individual portions they are really handy to serve at a Bonfire Night party – they also go really well with a small bit of fruit jam or fruit compote spooned over. In terms of texture they should have a thin crisp shell, and a moist centre, and just like a Yorkshire Parkin Cake they improve with age, and can last in an air tight tin for several days.

makes around 20 small round balls

Tip: this is going to get messy and sticky … using a mixing spoon is only going to get you so far, you are going to have to finish the mixing off and roll the balls out with your hands and fingers – to help combat the stickiness I use thin blue plastic catering gloves.

Into a bowl tip all the dry ingredients (flour, oats, sugar, spices and bicarb). Rub into the dry ingredients the softened lard (or butter) so that the dry mixture starts to turn into ‘breadcrumbs’ and the lard is distributed evenly. Use a spoon to spoon in the golden syrup (corn syrup) and black treacle (molasses) and drop in the beaten egg.

Start off mixing with the spoon, but to get really involved with the mixing and make sure everything is mixed thoroughly you are going to have to use your hands. When everything is mixed – gently knead the mixture between your fingers for a few minutes to soften and mould everything together – it should become a pliable, sticky dough, all evenly coloured and coated.

Pinch a bit of raw dough off the mixture and roll out into small balls (around 20) using the palms of your hand, and place them on a greased baking tray. Place the tray into the oven for 20 minutes, after 15 minutes see if they need 5 more minutes or if they are done.

Checking they are done: just like a Parkin cake these Aberdeenshire Parkins are easy to dry out and over bake. The outside of the ball needs to be ‘crisp’ but the centre should only just be cooked and still soft. They will continue cooking internally for a few minutes once removed from the oven so it is best to remove them a little early than a little late. As with Parkin, these little balls go really well with an apple jam or compote to spoon on.

This recipe comes from ‘Country Dishes’ edited by Barbara Hargreaves, a book of recipes from all regions of Britain – from the introduction: “… traditional Farmhouse Recipes from counties of Great Britain compiled by Suzanne Beedell from a host of recipes collected from farmers’ wives … also contributions from [earlier publications] County Federation of Women’s Institutes and Farmers Weekly … recipes handed down to them, and which they have proven. Thanks to all those who have preserved them.” These recipes were first published in 1962, with local and regional recipes handed down in families and dating from the 1800s.