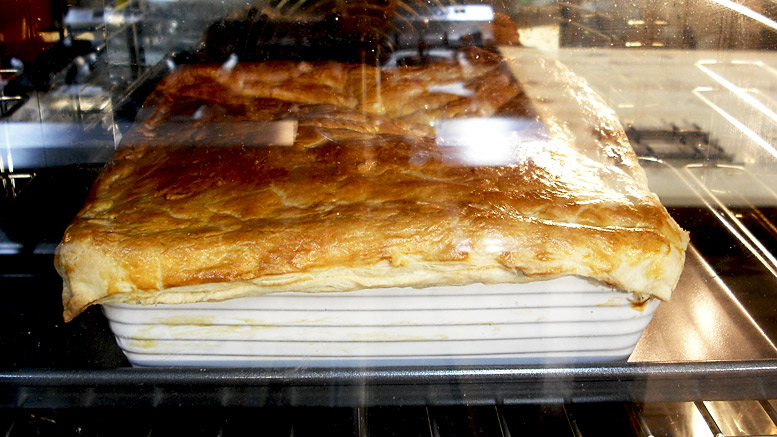 This Chicken, Ham & Leek Pie recipe comes from a small Pub in Wales; a small, smoky pub extended higgledy-piggledy since the 1700s, a proper pub with a real fire for the winter and real ale on tap. This Chicken pie has been made the same way, (to the same Welsh farmhouse traditions it was inspired by) from a recipe by an upland farmer’s wife who lived near Snowdon in the early 1900s. All we have done is make the gravy smoother and creamier, blending the root vegetables into the stock, which brings a wonderful and delicious earthy element to the pie. This pie is best served with creamy mashed potatoes, and it goes very well with a glass of chilled cider.

The secret to this pie: although this is a simple pie to make, it is not quick; you will need to spend about 90 minutes on the initial stages of the pie – the hot chicken stock and boiled veg should be blended to a smooth liquid before reducing , then add in the cream, before reducing once more to a thick, velvety and intense gravy.

This pie will feed around 6 to 8 people.

In a frying pan add a large knob of butter and on a low heat fry off the chopped onion, the sliced celery and thyme leaves. Once everything is softened and golden, (about five minutes) sprinkle over the plain flour and stir in – fry gently for two minutes to cook the flour out. Then take a ladle full of chicken stock and pour it into the frying pan, stir it in for a couple of minutes, so everything is smooth, then tip the contents of the frying pan into the chicken stock.

Simmer the chicken stock for half an hour to forty minutes until the potatoes and carrots are soft. Once simmered remove the bay leaf. Carefully pour the hot chicken stock, and all the vegetables, into a large blender and blend until the stock becomes smooth. Or blend everything in a tall saucepan with a stick blender.

Put this blended chicken stock back on a medium heat in a saucepan and simmer vigorously until the stock is reduced by one half. Stir frequently.

Once the chicken stock has been reduced by half add in the cream, stir, taste and season with sea salt and black pepper, then add in the diced, boiled ham.

In the frying pan add some butter and fry off in batches the Chicken, the Mushrooms, and the Leeks. Once browned and softened add straight into the saucepan and the stock / gravy.

Simmer this Chicken, Ham and Leek pie mixture (for about another thirty minutes) until the gravy thickens and reduces once more. At this stage keep an eye on the pan and stir frequently to make sure nothing catches and burns on the bottom. The gravy should become glossy and thick enough to easily coat the back of a spoon.

Roll out the puff pastry on a lightly floured work surface to the thickness of about 3mm and large enough to cover (and overhang by 2cm) the pie dish you are using (a 2 to 3 litre pie dish). Also cut out 4 x 2cm wide, 10cm long pastry strips which will go around the edges of the pie dish.

Fill the bottom of the pie dish with the thickened stock, Chicken, Ham and Leek pie filling. Brush the rim and edges of the pie dish with a little water and lay the four pastry strips over the rim all the way around the dish, joining to fit where necessary, and press down lightly. Brush this pastry rim with some beaten egg yolk.

Bake in the oven for 40 minutes, turning the oven down to 180C after thirty minutes. You want the pastry to puff up and be a golden brown, pull it out of the oven if it starts to go too dark. After 40 minutes remove from the oven and let it rest for ten minutes, serve with mash or chips.