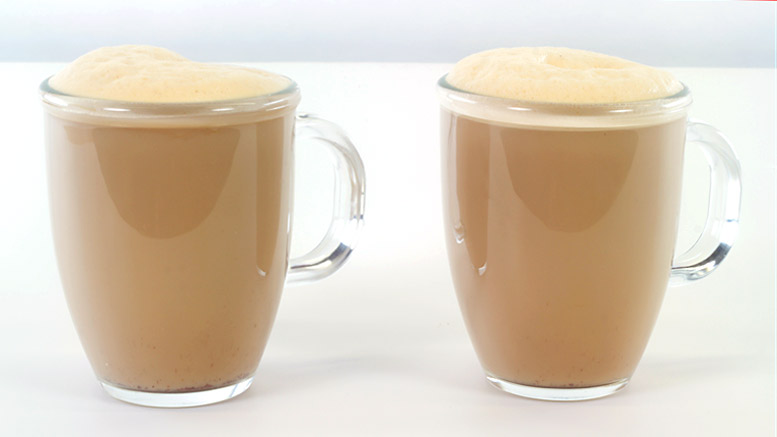 Egg Flip From A Victorian 1863 Recipe

These Victorian Egg Flip recipes (from 1862 and 1863) stem from an even earlier drink. The term ‘Flip’, first used in 1695, describes a mixture of beer, rum, and sugar, heated with a red-hot iron (like an iron poker) heated in the fire. Egg Flip, unlike Eggnog, is drunk warm and uses both ale and rum – traditionally the finished drink is poured continuously between large jugs to make it frothy before pouring into glasses – like a traditional Butterbeer.

From the magazine ‘Punch’ (or the London Charivari) published in 1848: “This usually inclement season of the year, the cheerful mug of egg-flip and the comforting tumbler of hot-spice, elder cordial are in great request as the means of raising low spirits and warming the cockles of the chilled heart.” And this is quite true, a mug of Egg Flip does indeed warm the cockles of even the most chilled heart …

Tasting Notes: The rum and ale work really well together, it is like a warm and sweet hot toddy, creamy and relaxing – I really enjoyed it; yet it should also be noted that there is a lingering taste of ginger on the tongue, drying the mouth, making the next sip all the sweeter … so a cycle and rhythm develops as you drink to finish the Egg Flip off. It also compliments the colder Eggnogg very well if served as an alternative.

Makes enough for about 4 small glasses (to the 1863 recipe seen below and suggested ratios) a small glass or goblet per person is perfect. H. Porter in 1863 also recommends Gin (as well as Rum) for his Egg Flip, but most recipes use a Dark Rum. Rum and ale go well together, gin and ale goes less successfully. Use a good quality ‘real-ale’ for this recipe, also known as a cask conditioned ale or beer. Note: Unlike the chilled Egg Nog, Egg Flip does not keep well – because it is heated it should be drunk warm soon after making, otherwise the egg will start to separate in the drink if left to go cold.

In a larger, heavy based saucepan put onto a medium heat 300ml of the real ale. In a mixing bowl beat the eggs and sugar into a creamy paste – when the ale is simmering just under the boil, turn down the heat and whisk in the beaten eggs and sugar.

Whisk thoroughly and continuously as the eggs might scramble in the ale. When the ale has thickened and the beaten eggs and sugar have mixed and dissolved thoroughly add in the Rum and whisk. Grate in the nutmeg and add the ground ginger. Whisk thoroughly then add in the remaining 600ml of ale. Leave on a very gentle heat for 10 minutes until the Egg Flip is heated right through.

Turn off the heat and either pour the Egg Flip between two large saucepans or jugs to excite the drink, and make it frothy, or whisk it continuously for two minutes. When frothy pour the Egg Flip into heat proof mugs, glasses or tankards and drink while still warm.

If outside of the UK and getting the following ales proves difficult, then get a good local ‘real ale’ brewed in the traditional way from your country, (referred to as ‘cask conditioned ale/beer’). Do not use a lager, even those brewed in the UK, lager and ale are two different beverages – in Britain beer and ale are interchangeable names for roughly the same thing (although it is slightly more complicated than that).

1) ‘Bishops Finger’ from Shepherd Neame Brewery. 2) ‘London Pride’ from Fuller’s Brewery. 3) ‘Old Peculiar’ from Theakston’s Brewery. There are many other good makes, but these three are some of the best. If bottled beer is not widely available then cans of ‘Old Speckled Hen’ from Greene King brewery are also recommended.

Add the whites and yolks of three eggs beaten together, with three ounces of lump sugar, to half a pint of strong ale; heat the mixture nearly to the boiling-point; then put in two wine-glasses of gin or rum (the former being preferable), with some grated nutmeg and ginger; add another pint of hot ale, and pour the mixture frequently from one jug to another, before serving.

Put a quart of ale in a tinned saucepan on the fire to boil; in the mean time, beat up the yolks of four, with the whites of two eggs, adding four table.spoonfuls of brown sugar and a little nutmeg; pour on the ale by degrees, beating up, so as to prevent the mixture from curdling; then pour back and forward repeatedly from vessel to vessel, raising the hand to as great a height as possible— which process produces the smoothness and frothing essential to the good quality of the flip. This is excellent for a cold, and, from its fleecy appearance, is sometimes designated ” a yard of flannel.”

Beat up, in a jug, four new-laid eggs, omitting two of the whites; add half a dozen large lumps of sugar, and rub these well in the eggs, pour in boiling water, about half a pint at a time, and when the jug is nearly full, throw in two tumblers of Cognac brandy, and one of old Jamaica rum.