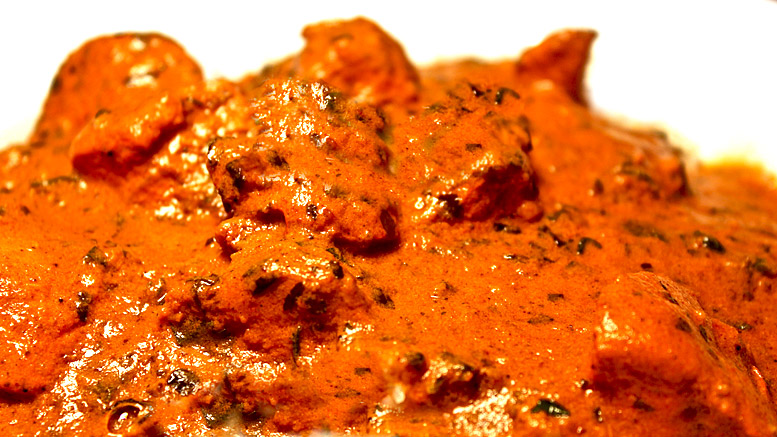 Chicken Tikka Masla is a British recipe, heavily influenced by Indian flavours, traditions and spices. This is a wonderful and very popular curry dish in which roasted chicken pieces (tikka) are served in a rich orange-red, creamy, lightly spiced sauce (masala). The true origins of chicken tikka masala are disputed. Some claim the dish was created for the Indian Mughal Emperors hundreds of years ago, yet there is also some truth to the claim that the origins of the modern dish came from Glasgow in the mid twentieth century.

The dispute about its origins arises because this yoghurt and spiced chicken dish (without the sauce) is based heavily on Indian influences, and so can trace its lineage back to the Mughal Emperors, however, the actual dish, chicken tikka with a massala sauce, (as it is known today, in its modern variation) first appeared in Britain, in Glasgow, (Scotland) in the 1960s. It is therefore of British/Indian heritage – it was certainly created in Glasgow in an Indian (or perhaps Bangladesh) restaurant, by Indian Chefs, most probably as a modern adaption in Indian cooking to cater for the British taste of having a sauce to go with the meat and rice, rather than eat the spiced meat ‘dry’. Although the associated legend of opening a can of tomato soup to make up the first one is very doubtful.

There are two very strong reasons for claiming chicken tikka masala is a modern British dish, influenced by Indian heritage cooking, the first reason is that chicken tikka masala is not included in the traditional dishes cooked in an Indian household, it is a restaurant dish, the second comes from the fact that there is no one standard recipe; there are at least 30 or 40 variations, and each restaurant or chef further makes the claim of serving the ‘best’ one. However, the recipe given below will make the perfect Chicken Tikka Masala, it requires a day to brine and then marinade the chicken, and also to grind your own spices for the garam masala blend, but it is well worth the trouble.

This is the sort of dish which rewards the extra time being taken to marinade the chicken for a day, and then when the dish is cooked through, leaving it another day in the fridge to develop all the deep flavours. Which means you can start to make this dish two days in advance, which also means very little preparation on the day you intend to serve it. Although this is just one of the many variations, this recipe for Chicken Tikka Masala will rival the best served in the land, and your guests will want the recipe before they go home.

For the yoghurt marinade

For the masala sauce base

For the finished dish

For a garam masala spice blend

You can buy a good quality authentic garam masala (a ground spice blend) or you can make your own. Make more than you need and store in a air tight container and use in other recipes

Prepare a garam masala by combining all the spices and the bay leaves. Scatter the mixture over a large baking sheet and roast for 1-1½ hours, in a low temperature oven, 130C or Gas 1/2 shaking occasionally, until the spices become aromatic. Leave to cool. Tip the spices into a spice grinder (or use a pestle and mortar) and grind to a powder. Pass the spices through a fine sieve to remove any husks or large unground bits. Transfer to an airtight container.

The day before cooking the Chicken Tikka Masala: brine the chicken pieces, and make the yoghurt marinade.

Combine 750ml of water with 2 tbsp of sea salt in a container and stir well from time to time to dissolve the salt. Meanwhile, remove the bone from the chicken thighs by cutting around the bone and drawing it away from the meat. Make three slashes across the thick side of each thigh and each breast so that the marinade will be better able to penetrate. Add the chicken thighs and breast to the brine, then cover and refrigerate for six hours.

After 6 hours pour off the brine and rinse the thighs and breasts under cold running water. Fill the container with fresh cold water and leave the chicken to soak in it for two hours, changing the water every 30 or 40 minutes to wash off the salt. Drain the chicken and pat dry with kitchen towel. It is always best to use organic, free-range chicken thighs and breasts, these always have better flavour and taste.

Trim the tops off four garlic bulbs to expose a little of the individual cloves, be sure not to cut the root end as this will help hold the garlic together. Drizzle a little olive oil over each bulb and wrap individually in squares of foil. Roast for 30-35 minutes in the oven, or until soft. Leave to cool completely.

Unwrap 3 of the roasted bulbs and squeeze these three bulbs of roasted garlic purée into a food processor, (reserving the last roasted bulb for the masala sauce). Add the peeled and chopped ginger, olive oil and salt. Blend until the mixture has a paste-like consistency.

Melt the ghee in a small saucepan over a medium heat. When it starts to bubble, whisk in all the chickpea flour until fully incorporated. Continue whisking for one minute to cook the flour. Remove from the heat and allow to cool.

Place a small frying pan over a medium heat. Pour in the olive oil, then add the chilli powder. Fry for 2-3 minutes, then leave to cool.

Once everything has cooled tip the yoghurt, chilli/olive oil mixture, garlic paste, chickpea/ghee paste and garam masala into a large bowl. Stir well to fully combine. Place the chicken in the yoghurt marinade and toss to coat thoroughly, pushing it into the cuts you made earlier. Cover the bowl and place in the fridge for ten hours.

PREPARING THE MASALA SAUCE BASE

Toast the coriander and cumin seeds. This should be done in a frying pan for ten minutes over a low heat, gently toss the seeds occasionally.

Meanwhile, wash the tomatoes and remove the cores, keeping the tomatoes whole. Bag the toasted coriander and cumn seeds in a square of muslin cloth tied with string. Place the bag in a saucepan with the water and tomatoes. Put on the lid and place over a medium heat then cook for 20 minutes.

After twenty minutes remove the lid and cook over a high heat, mashing and stirring frequently, for 10-15 minutes, or until the sauce has reduced by half. Discard the bag of spices and strain the tomatoes through a sieve.

Stir in the tomato purée, double cream and the roasted garlic puree (reserved from the yoghurt marrinade) and cook for 2-3 minutes. Add the strained tomato sauce and cook for ten minutes, stirring constantly. Turn the heat down to low. Add the garam masala, ground fenugreek seeds and ground turmeric, and simmer for five minutes.

Allow the sauce base to cool while you cook the chicken.

You can cook the chicken in one of three ways, over the hot coals of a BBQ, or fried on a thick iron, ridged griddle pan or under a hot grill. Shake off the excess yoghurt marinade first. The yoghurt marinade will be added to the masala sauce so reserve it.

We recommend using a small charcoal BBQ (if possible) and using tongs to turn the chicken pieces. Whatever method you choose, brush with a little melted ghee as you turn them. Leave the cooked chicken to cool slightly before cutting into large chunky pieces.

Heat the masala sauce in a pan (this can be the same pan as it was made in provided it is large enough to hold all the chicken). Add the yoghurt marinade, the coconut milk and the food colouring, and very gently simmer together for 1-2 minutes.

Note on the food colouring: use a natural organic food colouring agent, either made from beta carotene (carrots) for orange or beets (beetroots) for red. Some chicken tikka masala’s are red in colour others orange, choose your prefered colour, we favour the red colour, complimenting the tomato and chilli base of the suace.

Add the pieces of cooked cut chicken and simmer very gently for twenty minutes. It is then best to cool the mixture and store in the fridge for 6-12 hours, or until the next day, to develop both flavour and texture. Re-heat gently in a suacepan for twenty or thirty minutes, until all the chicken is heated right through. However, this is not essential, and you can serve straight away.