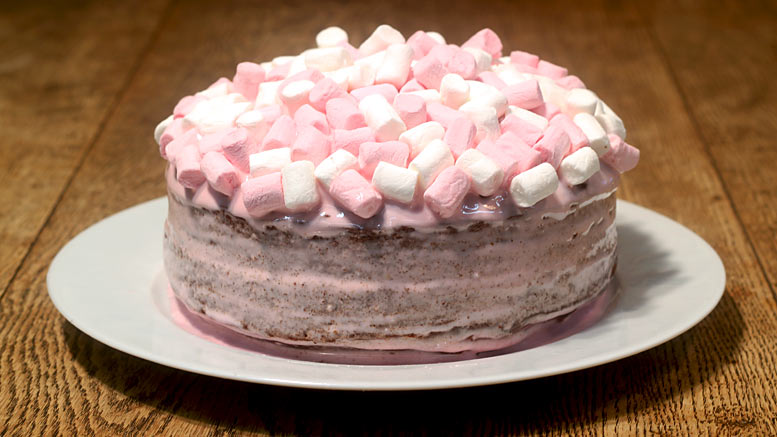 This recipe was quite popular in the UK at the turn of the 20th Century, but it is originally taken from “The American Cook Book”, (published by John Leng & Co. in the late 1920s or early 1930s). The cake hails from Missouri and was perhaps made for the “Veiled Prophet Fair”, (established in 1878) which became known after 1981 as the Fair St. Louis. It certainly has the look and feel of a 4th of July celebratory cake, which we would know as ‘Fairing Food’ in Britain and Ireland. As it stands this is a perfect Birthday, Halloween or Bonfire Night treat, particularly with lit ‘sparklers’ or candles pushed in to decorate.

For the Chocolate Cake

For The Marshmallow Icing 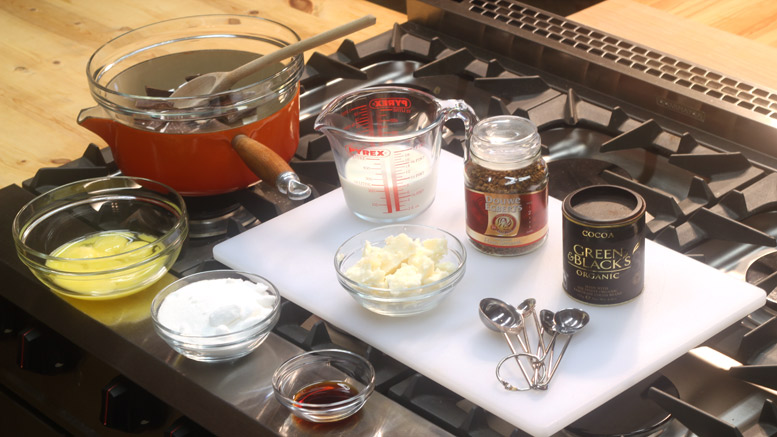 Getting Ready To Make The Chocolate Marshmallow Cake

In a large mixing bowl which is suspended (not touching the water) over a gently boiling saucepan of water (or double boiler) add the broken dark chocolate pieces and 2 tablespoons of milk. Leave to melt, stir once or twice. 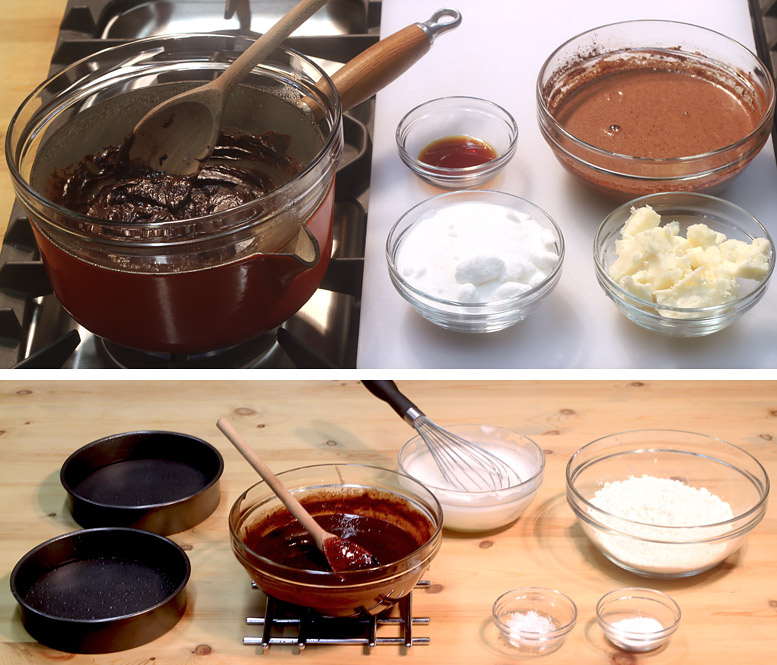 Making The Cake Batter For The Chocolate Marshmallow Cake

Over the gently steaming water stir this chocolate mixture until everything is thoroughly mixed in and begins to thicken. When everything is mixed together stir in the vegetable shortening. When this has melted add and stir in the sugar. When the sugar has dissolved stir in the vanilla extract. Finally take the mixing bowl off the heat and allow to cool.

Whisk the egg whites in their bowl until stiffened – this will take a few minutes.

When the chocolate mixture is cooler (after a few minutes) fold in the sifted flour, salt and baking powder to make a cake batter – then gently fold in half of the stiffened egg white mixture, retaining the air when folding – reserve the other half of the egg whites for the marshmallow icing. Pour this cake batter equally into the two prepared cake tins.

Bake the cakes in an oven at 180C for 35 to 45 minutes, check after 35 minutes to see if the cakes are baked by pushing a skewer into the centre of the cakes to see if it comes out clean and hot. Once baked remove the cake tins from the oven and allow to cool.

In a heavy bottomed saucepan pour in the sugar, water and white wine vinegar. As you bring this slowly up to the boil stir until the sugar dissolves. When at the boil stop stirring, turn the heat down and allow the the sugar to gently boil for a few minutes.

Once cooler add in the marshmallows to the sugar syrup and stir them in until they have melted and gone gooey over a low heat. Once melted stir in the remaining stiffened egg whites, then take off the heat to make a thick, oozing cake icing (slightly thicker than a glaze) – allow to cool. Place in the fridge to thicken the icing mixture if a little runny, but do not allow to harden.

Turn out the two Chocolate Cakes from their tins. Place one cake upside down on a plate, (use a bread knife to cut the top off the cake if it is domed to make it sit flat). Spread over half of the marshmallow icing, scatter over some mini marshmallows, then place the other cake on top (the right way up) to make a ‘sandwich’. Spread over the top of this cake the remaining marshmallow icing – sprinkle over some whole mini marshmallows as decoration – if looking for the wow factor add on top of the cake, pushing them in, ‘sparklers’ or candles, and light them just before serving. This Chocolate Marshmallow Cake should be eaten on the day of baking, but it can last a day if kept in an air-tight cake tin – the chocolate cakes before decorating can be made up and frozen well in advance.

Method: Mix sugar, water, and 1/2 tablespoon vinegar. Stir until the sugar dissolves. Do not stir after mixture starts to boil. Cover tightly for the first 5 minutes of boiling to steam off any crystals of sugar which may have adhered to the sides of the pan. Uncover [add the marshmallows] and boil gently until [the marshmallows have melted and] the syrup spins a thread. Remove from the fire and gradually pour this syrup on to the stiffly beaten egg whites, to which a few grains of salt has been added, beating vigorously and continuously. Continue beating after all the syrup has been added, until the mixture stiffens. Spread on cake.