Beer, or more appropriately in Britain and Ireland, the term ‘Ale’, is still a very common drink, and ‘real-ale’ is something of a passion for many people. Beer, in it’s most basic form, can be split into two subsets, ale and larger. This is because beers are produced by two main methods: by top-fermenting yeasts (ales) and those which are made with bottom-fermenting yeasts (lagers) – there are hybrids, but they will not interest us here. In fact here we are only concerned with the ‘top-fermenting’ yeast beers ‘or ales’, a fermented beverage made from grains and yeast. This is the traditional British and Irish drink, third only to water and tea, while lager does not have the same history associated with it.

Beer can trace its origins back at least 6,000 years to ancient Egypt and Sumeria. However, domestic ale production in Britain, i.e. home-brew, with a level of sophistication above the ancient Celts, Anglo-Saxons and even Medieval brewers, has been common in this country since the 1700’s, with brewing methods and ingredients staying pretty similar. Although not as common as it once was (with the easy purchase of commercially produced beers) micro brewing in Britain is still thriving and even once more growing, with the revival in interest of regional, speciality beers. Here we shall be discussing the different methods in brewing our own ale – both Home-Brew Kits, brewing with malt extract, and a Micro Brewery, brewing from grains. 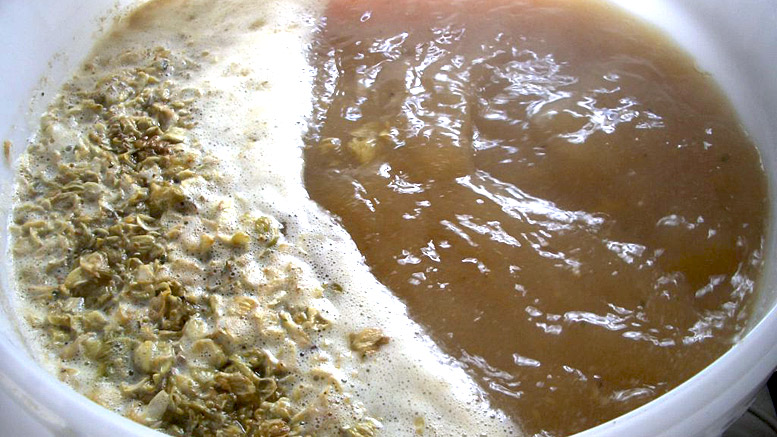 Ales: these were the first beers brewed in Britain, using barley or other malted grains, and they were first brewed without the addition of hops, like an Anglo-Saxon Ale, Ellen-Ealu Ale is an Anglo-Saxon ale you can easily make at home, this changed later on (in Britain around 1300 A.D.) with hops being grown in more widespread areas of low-land Britain – hops contribute a flavour and a bitterness that balances out the sweetness of the malt. Because the first ‘top fermenting’ ales were unstable, (brewers were not exactly sure what role yeast played in the process, just as bakers were unsure of it in baking bread) brewing ceased in warm weather and brewers would store their reserves in barrels in as cool or cold an environment as they could find so that it did not go off.

Since Anglo-Saxon times ale (or beer) became the main drink of the British people, with fermented ale being far safer to drink than contaminated waters in the growing urban areas. This ale was initially brewed at a weak strength and was consumed in large quantities: the average Anglo-Saxon monk had an allowance of at least three gallons a day. Today an ale includes everything with ale in the name (pale ale, amber ale, etc.), but also porters, stouts, and wheat beers etc. They generally have a more robust taste to larger, and are more complex, they are best consumed cool, rather than very cold, which reduces the complexity of the taste.

Making home-brew from malt extract is cheaper, cleaner and far easier than making beer right from the beginnings of using malted ‘grains’ of cereals such as barley. There are several companies that offer close approximations of the authentic taste of Victorian ales in their range and these make excellent beers. Most home-brewers start here. However, to faithfully replicate the beers of the Medieval, Tudor, Georgian and Victorian periods, you will need to do ‘micro brewery’ from the raw ingredients (with one thing to remember, the older the historical period ale was drunk in, the weaker it was). Here you can learn about both methods of brewing.

If you research a local historical beer recipe, knowing which malted grains were used, the hops used (if any) and the strength and recorded taste of the beer you will, with a little bit of practice, be able to reproduce it faithfully. The micro brewing recipe given here on the last page would be a classic British ‘Bitter’, a real-ale from the Georgian and Victorian period, (pale-ale or ‘bitter’ having been around from at least 1703, with the term ‘bitter’ being used as a name to distinguish between it and darker ales, such as ‘Porter’, by early 1800) however, there are no limits on what you can brew when you have the equipment and are a little more skilled in the brewing process. There are many societies and books on this subject and a lot of online resources and forums to help you out, but at least here you can make a beginning …

Brewing your own beer normally comes in the shape of buying a home-brew ‘kit’, and the use of malt extract in tins etc. which shortens the brewing process considerably. There is absolutely no harm in starting off this way, with just the need to add only water and sugar. Brewing is a serious business and dipping your toe in the water so to speak with a ‘kit’ is an excellent way of starting. There are many different kinds of home-brew kits and there are several different makers selling different types of malt extracts, by looking for the recommended ones, you can get some excellent results.

All types of ales are catered for (see the list of ale ‘styles’ on the next page) and online shopping and browsing for these types of kits is extremely easy. An example of a good malt extract is around £15 and it makes 40 pints of beer, you will also need a cheap complete micro brewery kit, (plastic fermentation barrels etc.) and they cost around £50. Following the kit instructions is easy, they are all pretty similar and pretty straight-forward – and if you keep in mind the following, you can make a really great beer, rivaling commercial ones at a fraction of the cost:

For those wanting to control the whole brewing process, from grains to finished cask product, then see the next page …