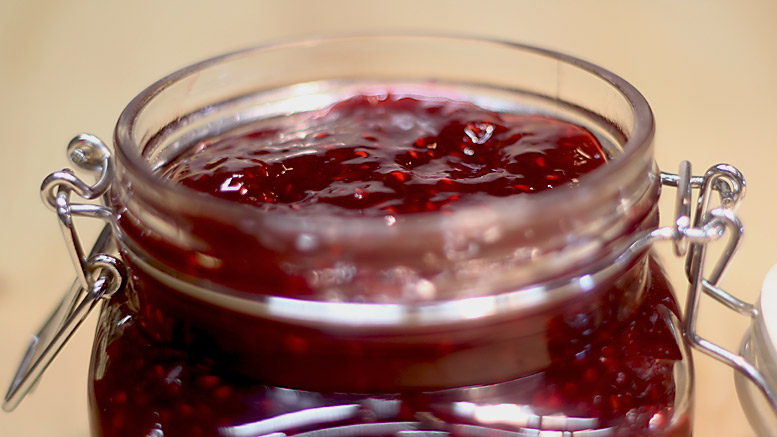 CAN I MAKE THE JAM WITH LESS SUGAR?

This is a common concern today; many people want to make jam with less sugar, lowering the calorie and insulin affecting properties of the preserve. The answer is yes, but using less sugar than the recipe dictates means you will not be able to keep the jam in storage for as long, and once opened it should be kept in the fridge to prevent the growth of mould. If you are overly concerned with the amount of sugar in the jam then perhaps you should make a fruit compote or conserve instead.

WHY DO SOME JAMS ADD LEMON JUICE?

The acidic nature of the fruit being made into jam also influences how well the jam will set (like the pectin levels). Adding in naturally acidic fruit juices, like lemon juice, also helps stop the jam from ‘discolouring’ and can give an enhancement to both the flavour and colour of the jam. You can use bottled lemon juice or fresh. However, I personally look to use other complementary juices to certain fruit jams. Rather than rely on lemon juice I would for example use redcurrant juice from fresh redcurrants in a strawberry jam instead, or an acidic type of apple and apple juice in a blackberry jam etc. A powdered form of Citric Acid, which does the same job as lemon juice, (without the added taste of lemon) is also sold in jam making supply shops or online.

I DON’T LIKE THE SMALL PIPS AND PITH, CAN I REMOVE THEM?

It’s your jam, you can do what you like to it. The jams that have the smallest, most annoying pips and pith tend to come from the small berries like blackcurrants. It is easy to peel and core the larger fruit like apples and pears, but doing it to blackcurrants would be too labour intensive. I personally don’t mid the ‘bits’ but if you want to rid the jam of these irritants on a consistent basis then the best bet is to buy a proper straining bag (sometimes called a ‘jelly bag’) which has its own stand and will strain the softened, mashed fruit over-night. Pushing the fruit through a fine sieve will never give you the same clear results that can be achieved as over-night straining through a cloth bag, but it can be a quick method of doing it.

If done incorrectly, with the wrong equipment, and being rushed, there are fewer more dangerous things to do in the kitchen. On a rolling boil the thick sticky liquid can reach temperatures over 200C. However, there is hardly any risk at all if you take your time, using a tall preserving pan (or saucepan) only half full, a long handled spoon to stir and a jam funnel to pot the jam. And although picking the fruit is a great family day out we do not advise making jam with younger children helping, in fact it is better for concentration if you are doing it uninterrupted by yourself. 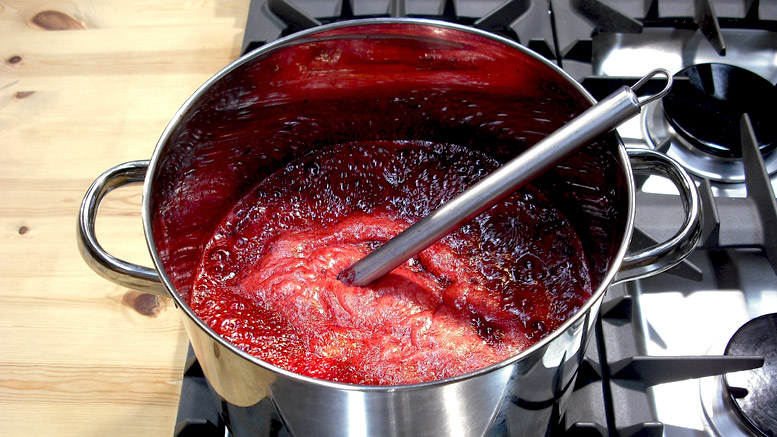 Jam And Preserve Making Safely In A Tall Pan

CAN I USE MY OLD SAUCEPAN TO MAKE JAM?

It depends … we ourselves have collected many old items of kitchenalia, including several old preserving pans, some over 180 years old, and although they look great, and there would be a romance in using one or two of them, we wouldn’t swap from using our modern, tall, heavy-bottomed high-quality stainless steel 7 litre pan (which washes clean effortlessly). Many people recommend a 9 litre pan – wide enough to allow rapid evaporation of water vapour, to thicken the jam quickly – tall enough to allow for rapid boiling and bubbling without ever reaching over the top – and with a thick enough base to protect the preserve from burning. A good quality stainless steel pan is the best modern choice for an all-round pan as it is non-corrosive and inert when cooking acidic fruit juices. Using enamelled preserving pans, or ones with an old fashioned design (unless of a very high quality from a reputable manufacturer) never conduct the heat fast enough for a responsive cooking time, (although you get used to the quirks of your favourite pan over time and compensate). Copper and and aluminium pans are not good with highly acidic fruit preserves and can taint the jam making process.

WHAT IS THE BIGGEST PROBLEM IN MAKING JAM?

Mess. Plain and simple. If you over fill the preserving pan (or it is not just big/tall enough) then when on a rolling boil the jam can spit droplets all over the cooker surface, which when dried, can be a pain to clean off. And if over confident or rushing when filling the jam jars/pots you can accidentally spill it everywhere, which is why it is good practice to lay down some old newspapers and have an old cloth handy. If prepared and don’t rush, most of the mess can be avoided.

DO I NEED TO STERILIZE THE JARS?

Always sterilize the jars and lids before potting the jam. Sterilize by either (depending on what the jar/pot/lid is made of) heating in an oven, heating in a microwave, immersing in boiling water, hot washing in a dish-washer and using sterilizing tablets dissolved in water. Take particular care when re-using old jars and lids. I always rinse in clean, very hot water, and then heat in an oven for ten minutes at 110C (which helps dry them). 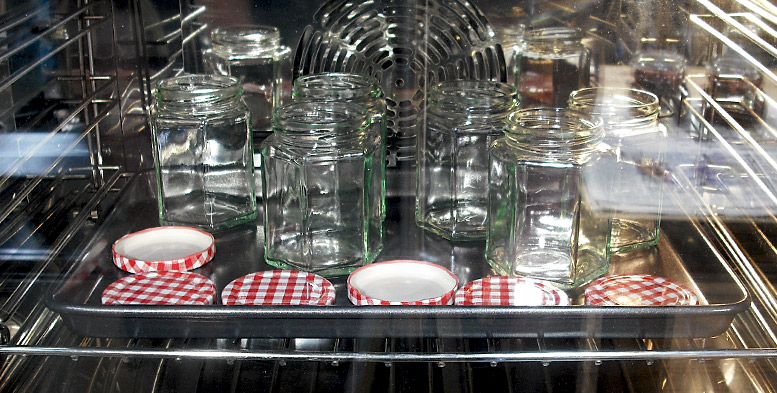 Sterilize Jam Jars And Lids In An Oven

STORING THE JAM, ANY TIPS?

Top up the jam in the jars/pots right to the top so that when closed there is very little air left – always top up with hot jam, do not allow it to cool after boiling. And when potting make sure there are no air pockets or corners of the jar left unfilled. If you used over 65% of the final weight in sugar then the jam will preserve a lot longer than a jam with less than 65% – at least 6 months to a year, and even longer. If using a metal top on the jars make sure they have been coated in plastic. Although you may want to display your hard work (and attractive looking jams) store the jam in a dark cool place after sealing, and when opened, the best practice is to put the jar in the fridge until fully consumed, within a month. And although it is important to seal the jars as soon as you have filled them, to ensure the jam remains sterile. However, you should then leave the jars to cool completely before labelling and storing them to avoid the risk of burns.

I MADE RUNNY JAM, SHOULD I THROW IT AWAY?

Do not throw the jam or preserve away if you have potted the jam and it is still too runny after a day or too of cooling and setting. You missed the setting point that’s all. Tip all the jam out into the preserving pan, add two tablespoons of water, gently bring up to a rolling boil, stir, and then ‘hard’ boil until the resultant evaporation thickens the jam. Clean and re-sterilize the jars and re-pot.

Always use the freshest and driest fruit possible – cook the fruit initially on a low heat to soften it and to extract the maximum amount of juice and pectin – some people warm the sugar in an oven before adding (which helps the sugar dissolve) – do not stir the jam frequently when on a hard rapid boil (it lowers the temperature and delays the setting point) you will quickly become experienced at seeing when a hard rolling boil is starting to thicken the jam, (and know it has reached a setting point and is ready to test) and when it could potentially catch and burn on the bottom of the pan and needs a stir – don’t be overly persistent in trying to remove too much scum or foam which rises (only spoon off the most obvious amounts) – move freshly potted jars only when completely cool and set.

Note: this is not intended to be an exhaustive list, but to get the beginner comfortable in making jam, and to help avoid most of the mistakes or problems that can crop up. Further reading is always encouraged in specialist books on jam and preserve making.