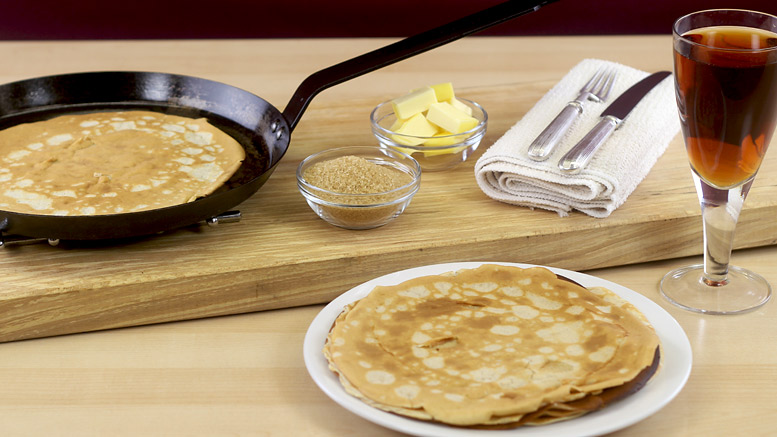 The oldest known ‘pancake’ recipe written down comes from the Tudor period. It comes from the cook book, “The good Huswifes Handmaide for the Kitchin” published in 1588, (titled on each page, ‘A new booke of Cookerie’). The recipe is actually very similar to our modern classic pancake recipe, although it has ale and cinnamon, with a little ginger added, which makes this spiced pancake good for all sorts of occasions, (Shrove Tuesday or Christmas Breakfast) indeed it can be an evening pancake recipe or a breakfast one.

You can see how the pancake developed by looking at Hannah Glasse’s Pancakes | 1740 Recipe and the classic and traditional English Pancake Recipe. If you are interested the earliest surviving true ‘pancake’ recipe is recorded in Apicius, a collection of Roman recipes thought to date from the turn of the fifth century, and the records suggests serving them with honey and pepper. And while these Tudor pancakes are very easy to make, you do need to use a traditional British ale for this recipe, and not a modern beer. 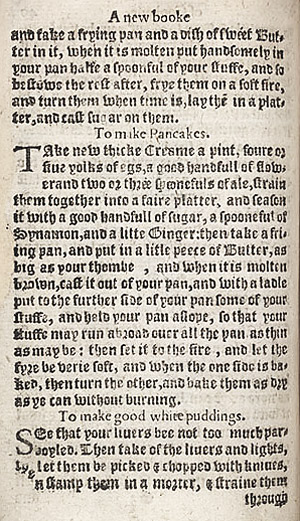 Take new thicke Creame a pinte, foure or five yolks of Egs, a good handfull of flower, and two or three spoonfuls of ale, strain them altogether into a faire platter, and season it with a good handfull of Sugar, a spooneful of Synamon, and a litle Ginger: then take a frying pan, and put in a litle peece of Butter, as big as your thombe, and when it is molten browne, cast it out of your pan, and with a ladle put to the further side of your pan some of your stuffe, and hold your pan aslope, so that your stuffe may run abroad ouer all the pan, as thin as may be: then set it to the fyre, and let the fyre be verie soft, and when the one side is baked, then turne the other, and bake them as dry as ye can without burning.

Taylor in 1630 A.D., had this to say about Pancakes. “Then there is a thing called wheaten floure, which the cookes do mingle with water, egges, spice, and other tragical, magicall inchantments; and then they put it, by little and little, into a frying-pan of boiling suet, where it makes a confused dismal! hissing until at last, by the skill of the cooke, it is transformed into the forme of a flip-jack cal’d a pancake, which ominous incantation the ignorant people doe devoure very greedily.”

In a mixing bowl sift in the flour, ground cinnamon and ginger. Make a well in the centre and using a spoon mix in the egg yolks. Then switch to a whisk and gradually whisk in the cream, then the sugar, then the ale, making a smooth and silky batter.

Use an 8 inch or 20cm non-stick frying pan (or a traditional English griddle) and for each pancake grease it lightly with a little butter – carefully wipe the surface over with a little softened butter dabbed onto a piece of kitchen paper, folded over to thicken it, keeping your fingers from the heat. For the first pancake heat the pan until the fat smokes, then turn the heat down a little.

Pour about 4 tablespoons (two small ladles) of the batter into the centre of the pan, and quickly tilt the pan to and fro to spread the mixture thinly across the surface evenly. The amount of batter poured in should just coat the surface of the pan, no more. 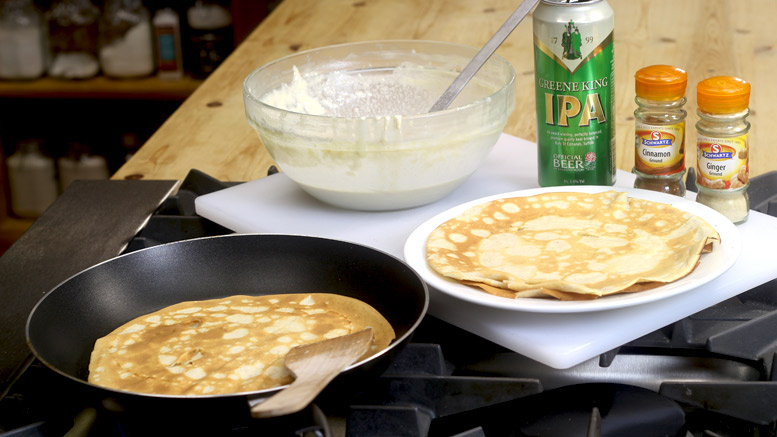 Making Pancakes From A Tudor 1588 Recipe

Cook the pancake like this on a medium-high heat for about 1 minute, until the batter has just set, (the bubbles on the top surface are drying out) and the edges are turning light brown and crisp.

Turn the pancakes over carefully with a wide palette knife or spatula, (they can be a little delicate so take care when turning them over – if they are too fragile whisk in a little extra flour) and cook the other side for about another minute, until it is golden brown underneath.

Turn out the Tudor Pancakes on to a warm plate – either serve each one at once, or keep them all on a warm plate and as they stack up keep the plates in a warm oven until you are ready to serve them. Being spiced with cinnamon and ginger they go well with a simple sprinkling of sugar and a dab of butter spread over.