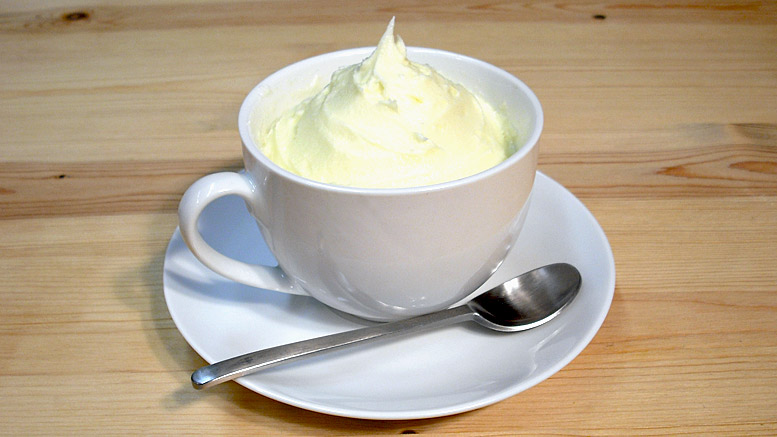 A Queen Cake can be baked with or without currants, although most modern references to Queen Cakes include currants or even candied peel. These Regency Period Queen Cakes are made without (although one of the original 1808 recipes calls for them, so they can be optionally added). These light sponge cakes are what we now term cup-cakes – which once was a ‘literal’ baking term. A cup cake was traditionally a small cake with the instructions, from the 1700’s onwards, to bake in a tea-cup or ceramic mug – the actual term ‘cup cake’ was first mentioned in 1828. Our recipe though is even earlier, a recipe given by Maria Eliza Rundell in her 1808 book, ‘A New System of Domestic Cookery‘, where she tells us to bake the cakes in a tea-cup.

The icing Maria Rundell recommends is not a thick, buttered icing, but the ‘royal icing’, flavoured with lemon zest and orange water, and thickened with egg whites (see the end of the post for the original recipe). However, if you wanted to you could use a buttered icing as this was also used in the period to ice cakes. With a little bit of artistic flair you can impress your friends when they are invited around for tea and ‘cup cakes’ by actually serving them in cups. Note: Most of the cakes served in the Regency period would have been turned out of the cups once baked, and then iced, but they also look great leaving them in the cups to serve.

Cup 1. Shows the plain Queen Cup Cake straight out of the oven. Cup 2. Shows a cup cake iced according to Maria Rundell’s instructions from 1806. Cup 3. Shows the cup cake iced, with candied citrus peel sprinkled on top. Cup 4. Shows a cup cake covered with a topping of lemon butter icing. You can of course turn the cakes out of the cups and ice them before serving or make them in a cake tin as smaller fairy cakes.

Using a tea cup or mug to bake the cakes: You can safely and successfully use a tea cup or mug to bake these cakes in as Maria Eliza Rundell suggests. However avoid the very finest ‘bone china’ tea cups. Use a porcelain tea cup. Do not use chipped tea cups, ones with metal rims, or ones with hairline cracks in the glaze etc. These small types of simple sponge cakes only need 20 to 30 minutes at 180C so the tea cups will withstand this sort of easy low temperature baking. Make sure you grease each cup with a little butter first. Many local ceramicists make fantastic porcelain cups and mugs of a very high quality and design, which can easily go into the oven, do a search for them. However, the ones we used only cost £2.99 each, including the saucer and have been in the oven many times.

For the lemon or orange royal icing

For the butter icing (optional)

Cream the butter in a large mixing bowl with the sugar and grated lemon zest, and beat until the mixture is light and fluffy. Gradually add the beaten eggs, then sift in the flour, and fold into the mixture. (If you want to follow the first recipe given by Maria Rundell then add some currants in now). Divide the mixture equally between the 12 holes in the cake tin or tea cups.

Divide The Queen Cake Batter Between The Cups

Bake in the preheated oven for 20 to 30 minutes, until risen and golden. Note: The smaller the cake, the quicker the baking time, using 4 large cups as shown in the photos took 35 to 40 minutes. When cooked, the centre of each cake should be slightly springy to the touch.

Baking The Queen Cakes Safely In Cups In The Oven

Remove the cakes from the tin and place on a wire rack to cool before you ice them. The cakes can also be left in the cups to ice and eat from.

Note: To make the lemon icing: it is important when working with this icing to keep it covered as much as possible as it dries out very quickly. If the icing is too runny it will run over the sides of the cakes; too stiff and it won’t spread nicely – although it is better to be too stiff than runny, thicken the mixture with extra sugar if needed.

In a mixing bowl, beat the egg whites with the lemon juice and orange water until combined. Add the sifted icing sugar and beat until smooth, the fine lemon zest is added last. The icing needs to be used immediately or transferred to an airtight container as this ‘royal icing’ hardens when exposed to air. Cover with plastic wrap when not in use.

To make buttered icing just use double the amount of icing (powdered) sugar to butter and add in a little lemon zest and a teaspoon of lemon juice. Beat together until soft and creamy. Spread on or pipe on using icing bags.

When the cupcakes are cool, spread a generous heaped teaspoon of lemon icing over the top of each one.

‘A New System Of Domestic Cookery’, By Maria Rundell, Published 1808

For a large one, beat and sift eight ounces of fine sugar, put into a mortar with four spoonfuls of rose-water, and the whites of two eggs beaten and strained, whisk it well, and when the cake is almost cold, dip a feather in the iceing, and cover the cake well; set it in the oven to harden, but don’t let it stay to discolour. Put the cake into a dry place.

Another way. Beat the whites of twenty fresh eggs; then by degrees beat a pound of double-refined sugar sifted through a lawn-sieve; mix these well in a deep earthen pan; add orange-flower water, and a piece of fresh lemon-peel; of the former enough to flavour, and no more. Whisk it for three hours till the mixture is thick and white; then with a thin broad bit of board spread it all over the cake.

Mix a pound of dried flour, the same of sifted sugar, and of washed clean currants. Wash a pound of butter in rose-water, beat it well, then mix with it eight eggs, yolks and whites beaten separately, and put in the dry ingredients by degrees; beat the whole an hour; butter little tins, tea-cups, or saucers, and bake the batter in, filling only half. Sift a little fine sugar over just as you put into the oven.

Another way. Beat eight ounces of butter, and mix with two well beaten eggs, strained; mix eight ounces of dried flour, and the same of lump-sugar, and the grated rind of a lemon, then add the whole together, and beat full half an hour with a silver-spoon. Butter small pattypans, half fill, and bake twenty minutes in a quick oven.