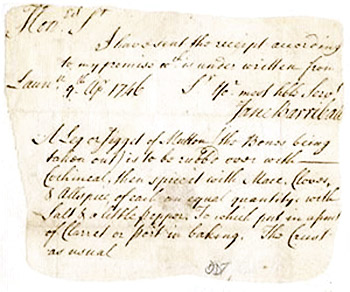 The earliest recipe for a ‘Cornish Pasty’ dates back to a letter of April 1746 – although we know that these types of ‘bake metis’ (or pies / pasties) have been a staple of the west country diet for hundreds of years before that. So old in fact that the next door county of Devon have claimed that they have the first known recorded instance of them.

There are four key lines of text, dating back to 1510, which refer to the financial cost of making a pasty, using venison from the Mount Edgcumbe estate, just across the Tamar River in Devon. However, this is not a recipe, it only the mentions a baked item; while the Cornwall Record Office actually has the earliest record of a pasty recipe from 1746.

The true origins and later developments of the pasty are largely unknown, although it is generally accepted that the ‘modern’ form of the pasty originated in Cornwall.

Tradition claims that the pasty was originally made as a ‘complete meal’ by the wives of the Cornish tin miners who were unable to return to the surface to eat when working down the mine shaft. They could take the pasty with them at the start of their shift, and when ready to be eaten, they could hold the pasty by the folded crust and eat the rest without touching it, discarding the dirty pastry fold that had been contaminated by their hands.

This recipe is from a copy held of original documents in the Cornwall Record Office at Truro, Cornwall. It appears in a letter from Jane Barriball, Launceston, to John Tremayne, Heligan, St Ewe, dated 9th April 1746, and it is for a mutton pasty.

Honoured Sir, I have sent the reciept according to my promise which is underwritten from Launceston 9th April, 1746 . Sir Your most humble Servant Jane Barriball. On the reverse of the recipe, we find the name of the ‘receipt’ … Venison Pasty.

A Leg or Jigget of Mutton (the Bones being taken out) is to be rubbed over with Cochineal, then spiced with Mace, Cloves & Allspice, of each an equal quantity, with Salt; a little Pepper. To which put in a pint of Clarret or Port in baking. The Crust as usual.

Note on the 1746 recipe: although it was called a ‘Venison Pasty’, as usual any meat would have been substituted according to season, availability and tastes, the letter recommends lamb or ‘mutton’. Secondly it calls for the crust to be baked as usual, this would not have been the shape we know of today, a flat crimped over pasty, but rather the more common English pie shape, or pie coffin. Cochineal is a red food colouring, still used today, in a liquid form rather than a dry rub.

Note: The pastry is best made the day before and kept in the fridge wrapped in cling film. Bring to room temperature before rolling out. We will be making the much older ‘pie’ shape, not the traditional flat pasty. Think of it like a pork pie shape.

Warm a mixing bowl and sieve the flour into it. Make a well in the centre and add the egg yolk.

Gently heat the lard and butter in the milk and water until it has melted, then bring rapidly to the boil. Pour immediately into the well in the flour and draw the ingredients together with a wooden spoon to form a soft, pliable but not sticky ball of dough.

Transfer to a lightly floured surface and knead until it is smooth and elastic. Cover and leave to rest in a warm place for 20-30 minutes – best left over night in the fridge if possible.

In a bowl place the chopped lamb pieces. Sprinkle over the food colouring and mix with the lamb. Leave for 5 minutes. Then sprinkle over the flour and all the spices and seasonings, and mix in thoroughly, coating the lamb. Heat a small heavy bottomed saucepan on a medium-high heat. Add in the butter and melt. Fry the lamb in small batches, this is so the temperature of the pan does not drop and stew the meat instead of frying it. This will take about 5 minutes per batch to brown all the meat.

Add all the meat back to the pan and add in the port (or red wine) and water. Bring to the boil then turn the heat down and cook it out on a low simmer for 30 minutes, partially cover the saucepan and stir every so often, so the liquid reduces by over half. After 30 minutes check the volume of the port gravy, and if too thin turn up the heat and boil to reduce, stirring it all the while. You want it thick enough to just coat the back of a spoon. Allow to cool completely.

Roll out two thirds of the pastry on a lightly floured surface to a circle around 3cm thick and around 18cm in diameter – place a jar or pie dolly in the centre of the pastry – mould the pastry up around the large, floured, straight sided jam jar, or pie dolly. If using a jar, leave the pastry to set around the jar for around 10 minutes on a baking sheet, then gently ease out the jar. This hand raising of pastry to make a British Pie, chewet, shape is a technique going back over at least 700 years. If a little unsure of this technique you can of course always use a pie tin or mould, but it will not look the same as a hand raised pie.

Pack the meat mixture into the pastry. Roll out the remaining pastry to make a lid for the pie. Press the edges together tightly to seal. Crimp or scallop the edges and decorate with cut out pastry leaves or shapes. Cut a hole in the centre of the lid. (Tie a double thickness of buttered greaseproof paper around the outside of the pie if you are unsure your pastry will keep its integrity while cooking) . Brush the top with beaten egg. Place on a baking tray.

Bake for 10 minutes. Reduce the temperature to 180 °C / Gas 4 and bake for a further 20 minutes. Remove from the oven (and the pie mould or greaseproof paper, if you have used it) brush the sides and top with beaten egg wash and return to the oven for 10 minutes, until a deep golden brown. Remove from the oven, leave until almost cold. Serve warm and at room temperature if re-heating.

Posted in All Recipes.
Share
←  NewerQueen Cakes | 1808 Recipe
Older  →The History Of Bread