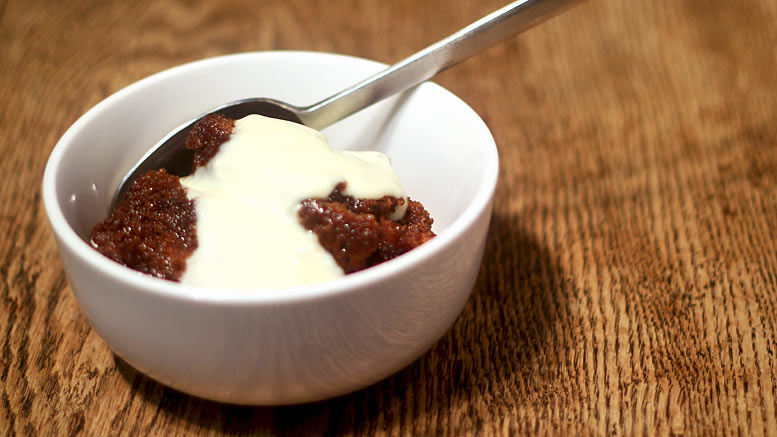 This Sticky Toffee Pudding recipe is a great tasting recipe, and it is certainly a modern British ‘classic’, alongside Jam Roly-Poly and Spotted Dick, and capturing for many the childhood memories of growing up in the 20th Century. Some say Sticky Toffee Pudding was developed in the Lake District in the 1960’s while others claim it is from an earlier 1907 recipe, (never published) but whatever its true origin, getting the balance between the pudding being too sweet, and being just right, is essential.

Sticky Toffee Pudding is actually made in two separate parts – a cake and a sauce. And as both components actually taste even better the day after making, giving the richer ingredients a chance to mellow, deepen and mingle over night, we recommend making it up the day before and just reheat the pudding-cake and toffee-sauce separately and gently. The baked ‘cake’ of the Sticky Toffee Pudding can be kept for up to 2 months in a freezer for later use, so it can be useful to make up several at once. The toffee sauce can also be kept in the fridge for several weeks, and is perfect for pouring over ice-cream.

Making tips: The cake for a sticky toffee pudding is supposed to be on the denser side of the cake spectrum, half way between a light sponge cake and a dense fruit cake, and so the batter-mix can be mixed altogether in a large saucepan. Not only does this save on washing up, it is a fool-proof method of making a wonderfully moist pudding. When making the toffee sauce the only tip is not to leave it alone, once started, (especially when on the boil) watch it like a hawk … it only takes five minutes so it is not an odious task. Our preference is for a toffee sauce which uses a golden syrup (corn syrup), it gives the sauce that real toffee taste when boiled with the double cream, just like a toffee sweet.

For the toffee sauce

Step 1: Into a large saucepan add 250ml of water and bring it up to a boil, when hot turn the heat down and add to it 2 tea bags. Let the tea bags infuse the water for two minutes to make a light tea – then remove the tea bags. Chop the medjool dates up and place them into the saucepan to soften in the tea. Bring the tea up to the boil, then turn the heat down to a simmer for five minutes to soften the dates, then remove the saucepan from the heat. 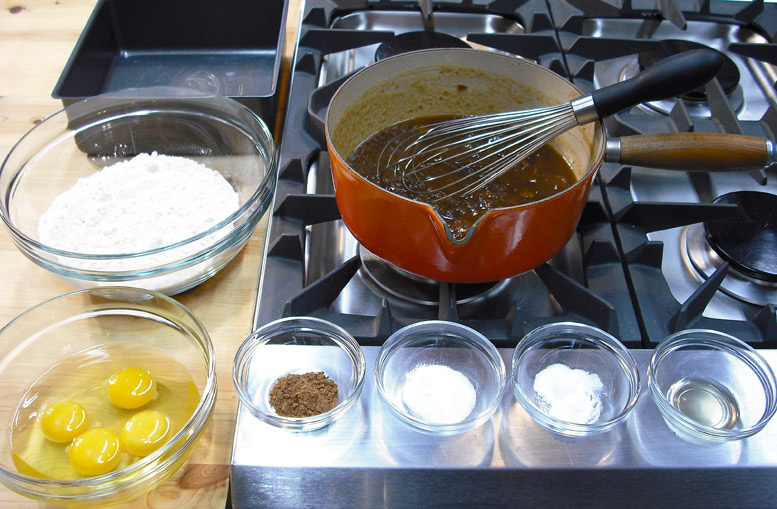 At this point add in to the saucepan the caster sugar and butter, stir to dissolve in the remaining heat of the tea and then set aside for 15 minutes to cool.

Butter and flour the sides of a 20 x 20cm square cake tin – if the tin is a good quality one, with a removable base, it should be fine, otherwise line the base with greaseproof paper to help ease the pudding out.

Step 2: Beat the eggs, and add them a bit at a time to the cooled ingredients in the saucepan, using a whisk to whisk them in fully (make sure the saucepan has cooled for 15 minutes before starting). Then add in the mixed spice, baking powder, bicarbonate of soda and vanilla extract. Give the whole thing a good whisk/stir. Add in the sifted flour and fold in gently until everything in the saucepan is fully mixed.

Preheat the oven to 180C

Step 3: Pour the sticky toffee pudding batter mixture into the prepared cake tin and bake in the oven for 45 to 55 minutes at 180C, or until the top is just firm to the touch, and a skewer inserted into the middle comes out clean. Do not over bake and dry the cake out, it will continue baking for a few minutes when taken out of the oven.

Remove the moist pudding-cake from the oven and allow it to stand in the tin for about five minutes before removing and transferring to a serving plate if eating that day. Or, once cooled, the Sticky Toffee Pudding cakes can be stored (covered in cling film or baking paper, then foil) in the fridge or in the freezer for use at a later date.

For the sticky toffee sauce:

In a medium saucepan (pick your best, non-stick pan for the job, one which has a thick base and tall sides) melt the butter and dark muscavado sugar together for four minutes over a low heat, (it might look for a while as if the two will never dissolve together, but they eventually do).

Add in the golden syrup (corn syrup) which is recommended, or use black treacle (molasses) which will give the toffee sauce a darker colour and a slightly bitter molasses flavour – your preference.

Stir for two minutes, then turn the heat up, and as the temperature rises, slowly pour in the double-cream. The sauce will change colour from dark brown to light toffee as the cream is boiled (see photos).

Stir for another four minutes on a high heat – this cannot be left, always stir it if it looks like catching and burning. Watch as it thickens and bubbles, we want it on a rapid rolling boil to evaporate any excess moisture.

It will start to expand as it boils so you need to make sure your saucepan is big enough to accommodate it (be careful as the toffee sauce at this point is very hot). Remove from the heat if the expansion is getting too high to the top of the saucepan, it will quickly drop back once off the heat.

After four minutes, when the sauce looks thicker, take the saucepan off the heat and allow the sticky toffee sauce to cool, to a warm, thickly oozing state. As it cools it will continue to thicken.

To serve the Sticky Toffee Pudding: Cut the moist ‘cake’ into squares or slices and serve on a plate with either a scoop of vanilla ice cream, vanilla custard or whipped cream, and a generous drizzle of warm sticky toffee sauce over the top.