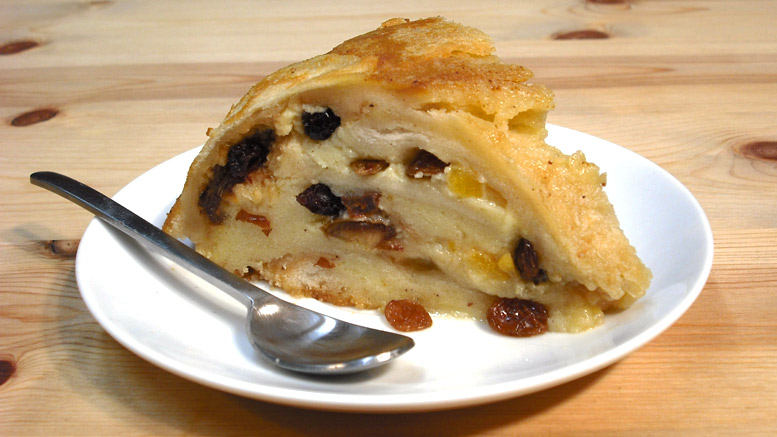 Whitepot - A Bread And Butter Pudding From A Georgian Period Recipe

This Whitepot (or white-pot) dessert recipe is particularly associated with Devon in the South-west of England, and it is one of the best baked puddings of the early modern period. This Bread and Butter based pudding recipe (sometimes it was cream and rice based) was very popular, and was published in most of the cookery books from the seventeenth-century onwards; their heritage can still be seen in the modern bread and butter pudding or rice pudding desserts of today. It is called ‘whitepot’ because the ingredients inside the baking pot (going into the oven) are glistening white, with the cream mixture. However, it comes out a lovely golden colour on the surface because of the butter, egg yolks and sugar in it.

This particular bread and butter pudding is really rich and has a very comforting and indulgent ‘classic pudding’ quality to it, it is very filling and quite moreish at the same time. The top crusts crisp up, and coated in sugar they become a counterpoint to the luscious soft bread and sweet-meats (dried fruit). This pudding is heartily recommended, particularly when the winter nights draw close. Equally good served warm or cold – this pudding deserves to be made several times during the year, and made as a special treat on 12th Night to go wassailing.

Boil a Quart of Cream with large Mace, let it stand till it is almost cold; then beat the Yolks of eight Eggs, and put them into the Cream with Salt and Sugar to your Taste. Lay thin slices of white Bread in the bottom of a Dish, and lay on them slic’d Dates, Raisins of the Sun, or what Sweet-meats you please, with bits of Marrow, or of fresh Butter, and lay on another Layer of Bread, Fruit, &c. till the Dish is full, grating Nutmeg between every Layer; then put in your Cream, and lay Slices of Bread and Bits of Butter on the top of all, and bake it.

The 1 litre of cream makes this a very rich and indulgent pudding, if you want to reduce the cream with 50% milk to make it less rich, it will still taste great: however, it is recommended to have it on a few special occasions made with just cream. This will make 8 to 10 portions.

Start by either slicing your bread, if home-made etc. into 20 slices, then cutting the thicker crusts off the top and bottom, leave the side crusts on. Butter each slice of bread on one side with a generous amount of butter, but leave some butter for the top of the pudding.

In a heavy-bottomed saucepan put the cream on to simmer on a low to medium heat for 4 minutes. Using a whisk, whisk in the salt, nutmeg and mace, frothing the cream slightly. Simmer for a further 4 minutes then take off the heat and leave to cool for twenty minutes.

In a large mixing bowl whisk the egg yolks and then beat in the sugar until creamy and smooth. When the cream has cooled for twenty minutes pour it into the eggs and sugar slowly, whisking it in. Make sure you whisk for a few minutes, and that the cream is not too hot, so that the eggs do not scramble.

Taking a very large oven proof bowl (which you are going to use to bake the pudding in) lay a couple of slices of bread into the bottom of it, and, overlapping at the edges, all the way around the sides. The butter side of the bread should be facing into the bowl. Use the back of a wooden spoon to press the bread down into the shape of the bowl. Then scatter in around one third of all the sweet-meats (the dried fruit). 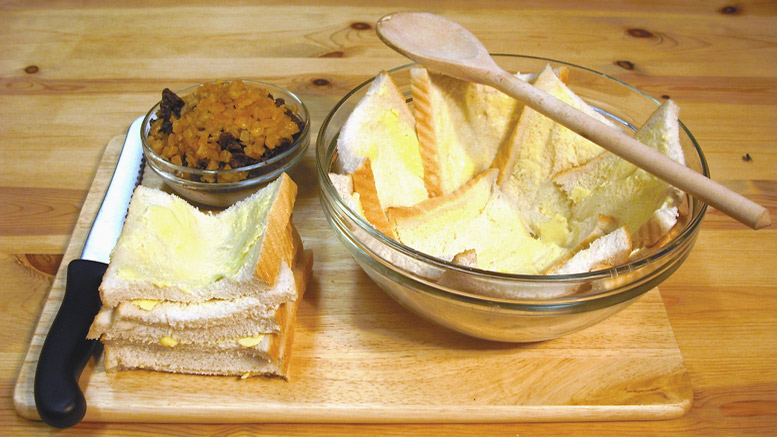 Layer The Bread And Fruit In A Bowl

Put some more slices of bread into the bowl to cover the dried fruit, press down on the bread layers with the back of the spoon, then carefully pour in one third of the cream mixture. Add some more dried fruit, some more bread layers, another third of the cream, more bread, and more fruit until the bowl is nearly full (you want to leave around four centimetres at the top for oven expansion of the pudding) then pour in all the remaining cream.

Finally over the top of the pudding scatter bits of the remaining butter from buttering the bread and the 2 tsp of brown sugar. And place in the oven at 180C for 60 minutes. 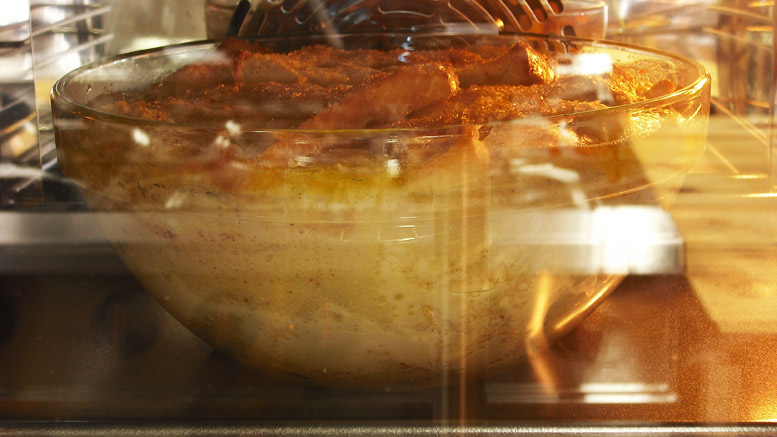 Once The Cream Has Been Added Bake In The Oven

After 60 minutes remove from the oven to cool. After about 30 minutes (or leave to cool completely if eating cold) you should be able to slide a cooks palette knife around the edge, and, by placing a shallow bowl or large plate on the top, invert the white-pot (bread and butter pudding) so that it comes out of the bowl to be sliced with a knife and served in small bowls. 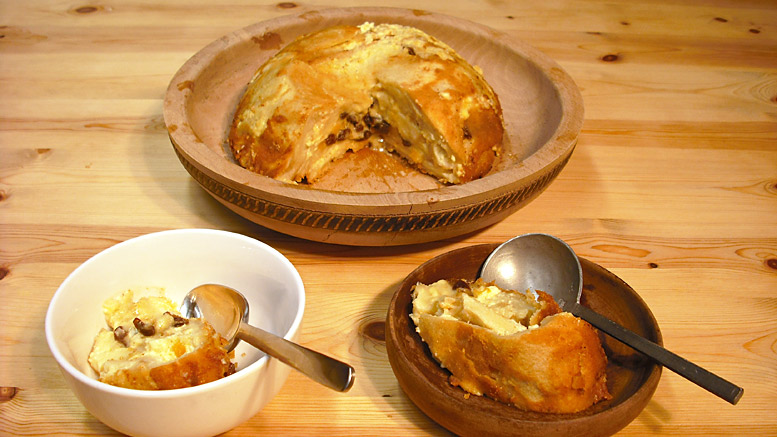