The celebration of Twelfth Night, the traditional last day of Christmas, is a custom that has largely died out now, but at one time there was a bigger party on Twelfth Night, which is the night of the 5th of January, than on Christmas itself. 12th night is traditionally (and merrily) marked by a feast of food and drink (like Lambswool)- and it is also marked by the baking of two special cakes, the King and Queen cake. In Britain this has now become a dense fruity cake (like a Christmas Cake) laced with spices, remembering the kings who came from the east and whose day, Epiphany, is commemorated on the 6th January. In France a similar tradition takes place with the ‘Galette des Rois’, the cake of the kings, which is a light pastry tart filled with an almond paste.

The King & Queen Cake: It has long been the custom in Britain to bake into the cake favours – items in the shape of a pea and a bean, or indeed, an actual dried pea and bean. Placed on top of the cakes, one baked with a bean in it, and one baked with a pea in it, are two crowns; one is a King’s crown, (on the bean cake) and the other a Queen’s crown (on the pea cake). These become a male and female cake. The man who found the bean in his slice of cake became ‘King’ and reigned for the evening, alongside his Queen who found the pea. The King and Queen would make up the games for the rest of guests to play and adjudicate over the evenings celebrations. This represents ‘misrule’, a very old custom in Britain and Ireland, for one night of the year, on 12th Night, the lord and lady became the servants, and the servants became the lord and lady. 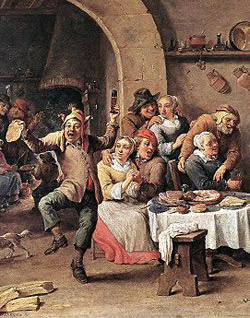 ‘Twelfth Night: Or King and Queen’, By Robert Herrick 1648

Now, now the mirth comes
With the cake full of plums,
Where bean’s the king of the sport here;
Beside we must know,
The pea also
Must revel, as queen, in the court here.

Begin then to choose,
This night as ye use,
Who shall for the present delight here,
Be a king by the lot,
And who shall not
Be Twelfth-day queen for the night here.

The Lord of Misrule symbolizes the world turning upside down. On this day the King and all those who were high would become the peasants and the peasants were elevated. The common theme was that the normal order of things was reversed. This Lord of Misrule tradition dates back to pre-Christian Pagan festivals such as Samhain.

Note: The 1864 recipe for traditional 12th Night Cake will make a very big cake, but the recipe is easy enough to follow, however we also give you a smaller cake recipe to follow if preferred, adapted from the 1864 one. If making both a King & Queen cake make two cakes, each as directed below. However, you can always make just one cake and decorate it with the two crowns, place the bean in one half of the cake, a pea in the other.

Cream the butter and sugar together until light and fluffy. Gradually add the beaten eggs, mixing well after each addition then add the brandy. Fold-in the flour, spices, fruit and nuts. Grease a deep 25cm cake tin and line the bottom and sides with greaseproof paper. Tip the cake mixture into this and tap to remove any trapped air. Optional: you can now add in the favours of a pea and bean, (traditional) or a small gold coin into each of the cakes (also traditional, although a later addition).

Place the cake in an oven pre-heated to 150°C and bake for about 2 and a 1/2 hours, or until the cake is firm to the touch. If the top of the cake darkens too quickly cover with a sheet of folded greaseproof paper about half-way through the cooking. Remove the cake from the oven, allow to cool in its tin for 30 minutes then tip onto a wire rack and allow to cool completely (this can now be covered and stored in a cake tin until needed).

Once cold cover the top surface of the cake with some of the warmed apricot preserve or apricot jam (to help the marzipan disc stick to the top of the cake). Roll out the ready made marzipan (to 5mm thick) and cut out a disc to cover the top of the cake, sticking it down with the jam. Allow the cake to set, (this can be up to several days if making it in advance, cover it in baking parchment and place it in an airtight cake tin). Then, when ready, put some more warmed apricot jam on the top of the marzipan disc, (to help the icing disc stick). Roll out the ready made royal icing or fondant icing, to about 5mm, and cut out another disc to fit. Place this white icing disc on top of the cake.

Leave for an hour then cover the cake in baking parchment and store. Place the cake in a tin and allow to set (overnight, or for up to two weeks). When ready decorate the cakes(s) – traditionally with small gilded crowns, made with pastry or marzipan, for the King and Queen – cut slices and serve with the traditional 12th Night drinks, Lambswool or Lambs Wool.

Note: these proportions allow for the cake being iced. If more sugar is preferred, the quantity must be the same as the butter; but less is used in this instance, that the cake may be light, and also to allow for the fruit, which would make it too sweet. Double the quantity of almonds may be used if required, as some persons prefer more.

Warm a smooth pan, large enough for the mixture; put in the butter, and reduce it to a fine cream, by working it about the pan with your hand. In summer the pan need not be warmed, as it can be reduced to a cream without; but in the winter keep the mixture as warm as possible, without oiling the butter. Add the sugar and mix it well with the butter, until it becomes white and feels light in the hand. Break in two or three eggs at a time, and work the mixture well, before any more is added.

Continue doing this until they are all used and it becomes light; then add the spirit, currants, peel, spice, and almonds, some or most of these being previously cut in thin slices, the peel having also been cut into small thin strips and bits. When these are incorporated, mix in the flour lightly; put it in a hoop with paper over the bottom and round the sides, and placed on a baking plate.

Large cakes require three or four pieces of stiff paper round the sides; and if the cake is very large, a pipe or funnel, made either of stiff paper or tin, and well buttered, should be put in the centre, and the mixture placed round it; this is to allow the middle of the cake to be well baked, otherwise, the edge would be burnt two or three inches deep before it could be properly done. Place the tin plates containing the cake on another, the surface of which is covered an inch or two thick with sawdust or fine ashes to protect the bottom. Bake it in an oven at a moderate heat. The time required to bake it will depend on the state of the oven and the size of the cake.

When the cake is cold, proceed to ice it. (See icings for cakes below.) Cakes have generally, first, a coating on the top of almond icing; when this is dry, the sides and top are covered with royal or white icing. Fix on any gum paste or other ornaments whilst it is wet; and when dry, ornament it with piping, orange blossoms, ribbon, etc.; the surface and sides are often covered with small knobs of white sugar candy whilst the icing is wet.

Pound, and sift some treble-refined sugar through a fine sieve, and put it into an earthen pan, which must be quite free from grease; to each pound of sifted sugar add the whites of three eggs, or sufficient to make it into a paste of a moderate consistence, then with a wooden spoon or spatula beat it well, using a little lemon juice occasionally, and more white of egg if you find that it will bear it without making it too thin, until you have a nice light icing, which will hang to the sides of the pan and spoon;

A pan of icing, when well beat and finished, should contain as much again in bulk as it was at the commencement: use sufficient lemon juice to give the icing a slight acid, or it will scale off the cake in large pieces when it is cut.