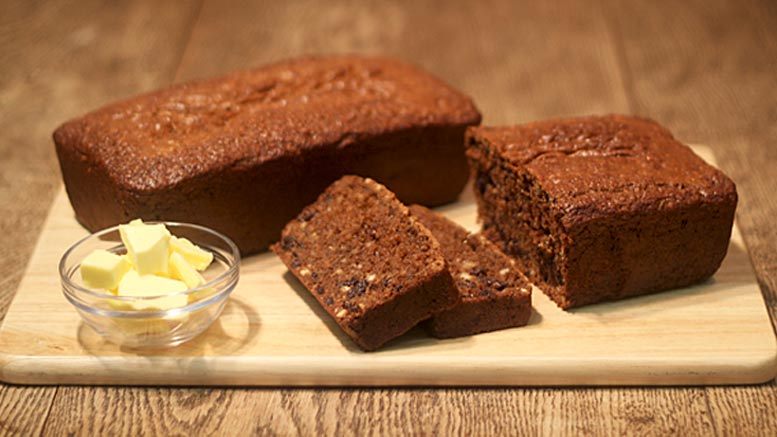 This Bara Brith recipe is an authentic recipe from Wales which is more like a ‘cake’ than the more traditional ‘bread’ Bara Brith. This cake-like Bara Brith is made without yeast, using commercially available (from the late 1800s) baking soda as a quick raising agent alternative. The main recipe given below is a wonderful traditional one, handed down in the family from a farmer’s wife living in Harlech, North Wales, in 1951. It is an incredibly moist and well balanced Bara Brith in terms of taste using black treacle (molasses). If you would like to make the older, more traditional type of Bara Brith, which is a yeast bread made with fruit, then see Bara Brith | Traditional Recipe – this bread-type of Bara Brith is often eaten, toasted with butter, on Christmas Morning for breakfast. Bara Brith translated means ‘Speckled Bread’, see also Bara Brith | Regional Recipes for regional differences and several different recipes.

Soak the currants (or dried fruit) in 200ml of tea for two hours or overnight.

Making The Bara Brith - Soaking The Currants In Tea

Sift the flour into a large mixing bowl. Using your fingers rub into the flour the softened and diced lard (or butter) until the mixture resembles breadcrumbs. Sprinkle in the bicarbonate of soda, cream of tartar and sugar (and the ground mixed spice if adding). Stir, then add in the currants (including any tea if soaked) and the candied peel.

Beat the eggs with a little lemon juice (or white wine vinegar) and add to the mixing bowl, stir everything in and then add in the buttermilk (or milk and melted butter). Finally add and stir in the black treacle.

Once everything is thoroughly mixed, and the batter is slightly on the wet side of a ‘dropping’ consistency, (add in a little more milk if the batter is stiff) pour it into the prepared loaf tins (large sized ones, if not use cake tins). Only pour in up to two-thirds full in the tins, allowing for the Bara Brith’s expansion and rise. Use a spoon and stir the batter mixture in the loaf tins to get rid of any air pockets and to bring the dried fruit off the bottom, so it is mixed evenly throughout the Bara Brith.

If at any point it looks like the tops of the Bara Brith’s are browning too quickly, cover them loosely in a piece of foil or baking paper. After 90 minutes check to see if the cakes have risen and are fully cooked in the centre by pushing in a skewer, if it comes out clean and hot the cake is ready, if not leave for another 15 minutes.

Making The Bara Brith - Baking Them In The Oven

The Original Bara Brith Recipe From Harlech in 1951

Method: Rub the fat into flour. Add fruit, sugar, soda, cream of tartar and peel. Beat up the eggs and add. Finally mix in the buttermilk or milk, and treacle or browning to darken the cake. Bake in a well greased tin in a hot oven for 2 to 2 1/2 hours.