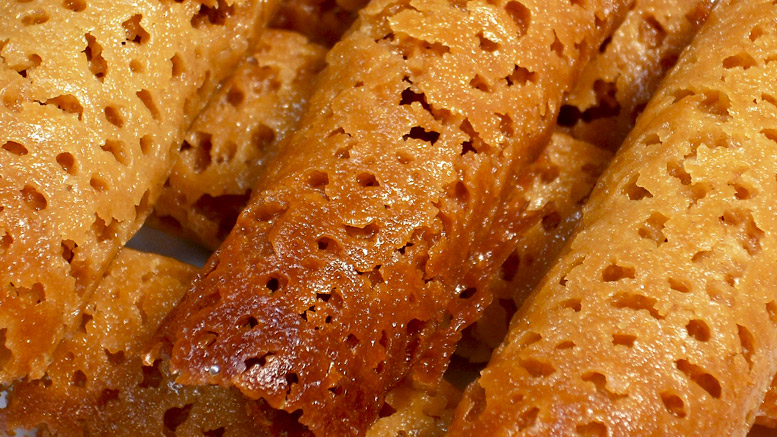 A Brandy Snap or ‘Fairing’ is an old fashioned treat which stems from ‘Herefordshire’: old fashioned and unfortunately out of fashion, which is a shame, as these are bursting with flavour and go so well with so many of the great hot toddy drinks and mulled wines made in the winter months. I suppose one of the reasons for their fall from grace is that when you make a Brandy Snap it can at first be frustrating and fiddly, because timing is everything. Yet they are well worth the effort, and are a surprise treat for guests who will have forgotten how good they are.

A ‘Fairing’ is a gift or sweet bought at a Fair, or seasonal market, for example in Cornwall they have a ginger-bread biscuit, while the Irish have the ‘Yellowman’ … and these traditional Brandy Snap fairings were sold at the Herefordshire Fair in the early 1900s.

Note on this Recipe: in this recipe you can see the quantity of butter is much higher than in other, more modern recipes. However, this is the authentic recipe which stems from Herefordshire. Modern recipes use an equal amount of butter / sugar / flour in them, and you therefore do not get the true toffee texture or taste of an original ‘fairing’ or ‘brandy snap’ of the early 20th Century. A true Brandy Snap will also have a myriad of holes all the way through it, as the moisture from the butter in the toffee evaporates in the hot oven.

the recipes collected in this book come from people living and working in Herefordshire, mainly farmer’s wives, who have recorded local and regional recipes which have been kept and used in their family, many of these recipes date from the 1800s.

Put sugar, butter and syrup in a saucepan and melt on the stove. Allow to cool a little before adding a squeeze of lemon (and/or brandy) and the flour. Stir very carefully until smooth. Drop teaspoonfuls of this mixture onto greased baking tins and cook for about 10 minutes in a fairly hot oven. Remove from oven, and wrap each quickly, while still hot, around the handle of a wooden spoon. Remove and leave to cool.

Makes 18 large Brandy Snap Wafers. Brandy Snaps go soft if left in the air for over a day, so they are best eaten on the day they are made or stored in an air tight tin.

Recipe Ingredients For The Cinnamon Cream:

In a big enough saucepan melt the sugar, golden syrup and butter. Stir and as soon as everything has dissolved let it start to bubble on a rolling boil for a minute or two, this helps evaporate out some of the moisture.

Remove from the heat, leave it cool a minute, and then stir in the flour, ground ginger, lemon juice and brandy. It will thicken as you stir – place back over a low heat for about 5 minutes and stir continuously, to make everything smooth and to get any lumps out of the flour which was added. It should thicken into a very thick syrup or soft paste, add a little more flour (only if necessary) to thicken, and then cook it out.

Using a tablespoon to drop six small amounts of the thick syrupy mixture on the buttered baking sheet. When they are heated they will spread naturally in the oven, so make sure you leave a large enough gap between each drop of mixture.

Bake the Brandy Snap wafers in batches of six, for about 10 minutes in a very hot oven (220C). They will bubble and turn from a golden yellow to a rich golden brown to a darker brown. Small holes will appear in the toffee discs all over as some of the moisture is evaporated out.

At this point, turning from dark golden brown to dark brown, remove them from the oven, but leave the wafers on the baking sheet for 5 minutes until they are cool enough (and less delicate) to roll.

Use a palette knife to lift each wafer from the tray – one at a time – they will still be hot so be careful – if the wafer tears then leave it to set a little longer, they should be flexible, but not break.

Carefully wrap each wafer around the handle of a thin wooden spoon (or similar) with your hands, (they will be hot!) gently pressing the biscuit to fit the shape of the handle. Work quickly, as the wafers will break once they have completely cooled and become brittle. Remove each Brandy Snap once it has been curled, and set, and leave to completely cool.

To make the cinnamon cream filling:

Whip the double cream till thick, but not stiff. Stir in the mascarpone and sugar until everything is smooth and silky. Add in a couple of drops of vanilla extract and the ground cinnamon, stir them in fully. Then either use a piping bag, with a long, thin nozzle (which is best) or a teaspoon, fill the ends of each Brandy Snap with cream.

Note on Technique: Once out of the oven the Brandy snap wafer is far too soft and delicate to curl, it needs to be left for about three to five minutes to start to firm up and become flexible. However, as the Brandy Snap wafer further cools it becomes hard and brittle, and within the next five to ten minutes they become too brittle to curl, and they will break if you try. So there is only a small window of opportunity to curl them successfully – therefore you can only make about six at a time – by the time you are curling the sixth one the wafer is at the last stage when it can be curled without breaking.

When handling them to curl they will still be hot, so to get them off the oven tray slide a palette knife under them, then carefully lay the Brandy Snap wafer over a wooden spoon handle (or similar) to make it curl. To be honest the first time you try to make Brandy Snaps they might not be great, (so don’t lose heart) but by the second and third batch of six you will get much better at it – I was on my third batch until I started to get them perfect. The first batches (if failures) should be broken up into little pieces and scattered onto chocolate ice cream, which is a delicious way of eating them.

If you are serving a brandy snap with drinks, an Irish Coffee or a Hot Chocolate etc., then they are best left plain, however if you are serving them as a treat then fill them with the Cinnamon Cream, the recipe for which is below. A cinnamon cream filled Brandy snap is a real Christmas and New Year’s delight, and a wonderful home-made luxury served on the night of Christmas Eve … so don’t forget to leave one out for Santa.