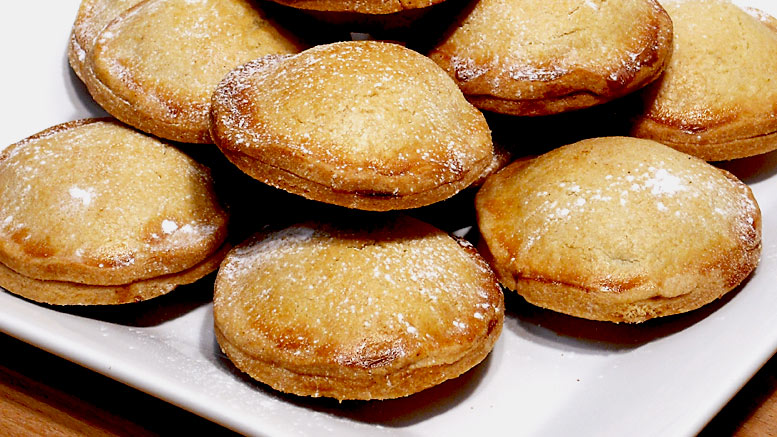 This recipe will make what is now considered to be the most ‘traditional’ of all the mince pie recipes … a classic winter-spiced, all fruit and brandy mincemeat filling from the early part of the 1900s. This particular mincemeat filling should ideally be stored and matured for a few months, like a vintage wine, to get the best flavours to develop, (this recipe mellows into a really wonderful, sweet and juicy fruit filling which cannot be beat) but it can also be ready to use after about 4 weeks. Mincemeat Masterclass.

This mince pie has everything which makes food at this time of the year special, however here are a few tips to get the best results:

Makes around 24 mince pies. If you want to make some of the mince pies vegetarian (non-traditional) make sure you use vegetable suet in the mincemeat filling and replace the lard in the pastry with extra butter.

Making the Mince Meat: For greater detail on making the mincemeat see this Traditional Mincemeat Recipe. Wash all the dried fruit under running water in a colander and leave to dry. Peel, core and chop the apple small. Then, in a large mixing bowl (oven proof at low temperatures) combine all the ingredients, except for the brandy, stirring them in so that no one ingredient is clumping together. (Tip: try to get the most lemon and orange zest and juice out of the fruit as possible). Then cover the bowl with a clean cloth and leave the mixture in a cool place overnight, so the flavours have a chance to initially mingle, deepen and develop.

The next day pre-heat the oven to a low temperature of 120°C.

Cover the mixing bowl loosely with foil and place it in the oven for 3 hours – after 3 hours on a low heat remove the bowl from the oven. The suet will have melted and the apple will have stewed and macerated, leaving the mincemeat covered in a thin, watery fat. This is fine, and exactly what we want; with this method of preparing the mincemeat the melted fat (with the added alcohol) will stop any fermentation during storage (making this recipe fine to store for several months).

After removing from the oven, and as it cools, stir the mixture from time to time; instead of the suet being in tiny shreds (from packet suet or shredded from fresh suet) it will have melted from being in the oven, and so by stirring it in, the fat will coat all the dried fruit and fresh apple as it cools .

When the mincemeat is cold, stir again, adding in the brandy. Leave this covered with a clean cloth overnight, the next day stir for a final time and then pack the mincemeat in jars which have been sterilised, ready to be used in Mince Pies when needed. When filled right to the top (with very little air space left, or air pockets in the mincemeat) seal the jars and store in a cool, dark, dry place like a store cupboard or pantry. Age for at least 4 weeks (can be left significantly longer).

In a large mixing bowl sift in the flour then add in the softened diced butter and lard (or just use extra butter instead of the lard if a vegetarian pies are being made) and rub it together with your finger tips and thumbs until the flour looks like very fine breadcrumbs – it takes a few minutes to get all the fat rubbed in well.

Sprinkle in the sugar and add in the egg yolk and milk and mix with a wooden spoon until the mixture starts to clump together. Then gently squeeze the pastry in your hands and fingers until it comes together into a soft, silky and pliable ball – add a little extra milk only if it feels dry, be careful, it is easy to put too much moisture in, making the pastry wet. When made wrap the pastry in cling film and chill in the fridge for 30 minutes.

Roll the mince pie pastry on a lightly floured surface to about 3mm and using a 7cm fluted pastry cutter, cut out 24 discs and line two 12-hole small pie tins with them. Use a smaller 6cm fluted cutter to cut 24 discs for the lids or pie tops.

Spoon 2 heaped teaspoonfuls of traditional mincemeat (made earlier and stored in jars) into each tart, pack the mixture in so the pies are full of filling. Dampen the edge of the pastry bottom with milk and sit a smaller pastry disc on top, crimp with your fingers or a fork to seal. Brush the tops with a little milk.

Bake for 20 to 25 minutes at 190C until golden brown, remove from the oven and cool on a wire rack. Serve the mince pies warm or at room temperature, dusted with icing sugar. These mince pies can be stored in an air-tight tin to be eaten later, or given as gifts. Eat within a few days.