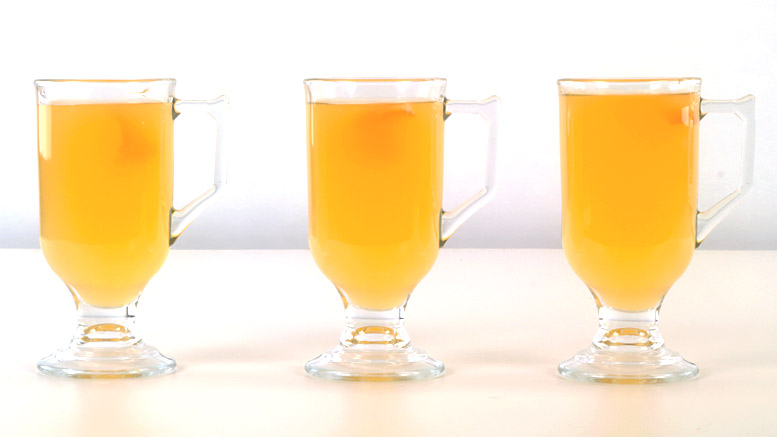 The recipe for this Punch-Royal comes from John Nott, published in 1723. The recipe contains no spices, which was quite usual at the time, and it is a powerful drink, but it is also certainly warming, particularly for those cold winter nights; and it is perfect for a stronger punch taken out in a hip flask around Christmas. I would not serve large amounts of this punch (see Hogarth’s painting below for those perils!) but I would serve it for a few stop over guests in front of the fire in small glasses. In terms of taste, Punch Royal is not as fiery as you think it would be, but it is strong, and yet it is a surprisingly smooth drink; although bare in mind that the taste of Brandy does dominate, so buy a very good Brandy to make it with.

The Food Historian Ivan Day (talking about this particular recipe) stated, “punch [in this period] was often made more relishing by dangling zests of Seville orange peel in the bowl. When these started to impart a bitterness to the beverage, they were removed”. Following this advice, and the painting by Hogarth, (see below) we will be adding in a length of orange zest to our drinks too.

From John Nott, The Cook’s and Confectioners’s Dictionary’. London: 1723

Take three pints of the best brandy, as much spring-water, a pint or better of the best lime-juice, a pound of double refined sugar. This punch is better than weaker punch, for it does not so easily affect the head, by reason of the large quantity of lime-juice more than common, and is more grateful and comfortable to the stomach.

Into a small jug add the sugar, then add the Spring Water, stir, leave for two minutes to let the sugar start to dissolve. Add the brandy, stir for a minute, then leave for another two minutes. The sugar will have started to dissolve more fully after five minutes.

While the sugar is dissolving squeeze the juice of two or three fresh limes then add the juice to the Punch and once again stir. Use a knife or a peeler to peel two x 2cm lengths of orange zest from an orange skin, careful to avoid cutting into the white pith.

Stir the Punch Royal one last time and pour into two glasses, over the top of each drink twist the length of orange zest and then drop one zest in each glass.

When you look at the ratios of the drink, (3:3:1) which is 3 parts water to 3 parts brandy and 1 part lime juice you might be forgiven for thinking that this would be too much for most people, but in a small glass it really is rather good, with a refreshing quality to it, and although it is served cold, it definitely brings a rosy glow to the cheeks … but just beware the temptations of a fourth or fifth glass, having sampled it you will see why Hogarth painted what he did in 1732 … 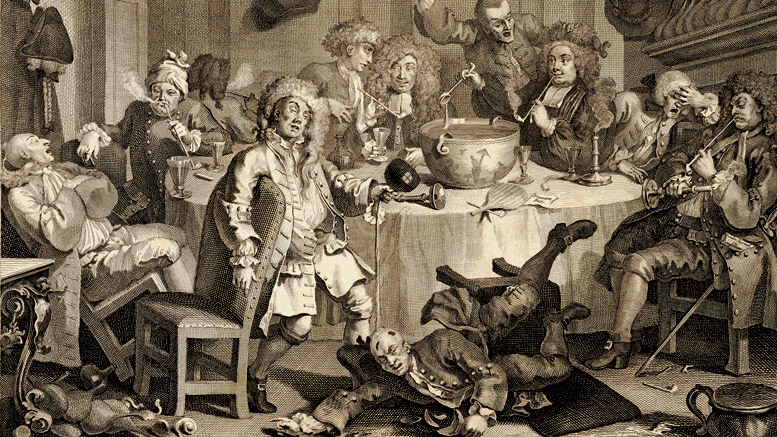 Punch parties were common in the 1700’s, for the rich and well to do, as shown in William Hogarth’s ‘Midnight Modern Conversation’ (1732) and they could get out of hand. In this work the artist humorously satirises the activities that took place in the drinking clubs that had sprung up in early eighteenth-century London to cater to a male clientèle drawn from the middle and professional classes – clubs that we know Hogarth himself regularly frequented in this period. Rather than sipping tea or even, as in some conversation pieces of the period, politely drinking wine, Hogarth’s male protagonists, gathered around a table dominated by a huge punch bowl, are pictured in a state of extreme inebriation.