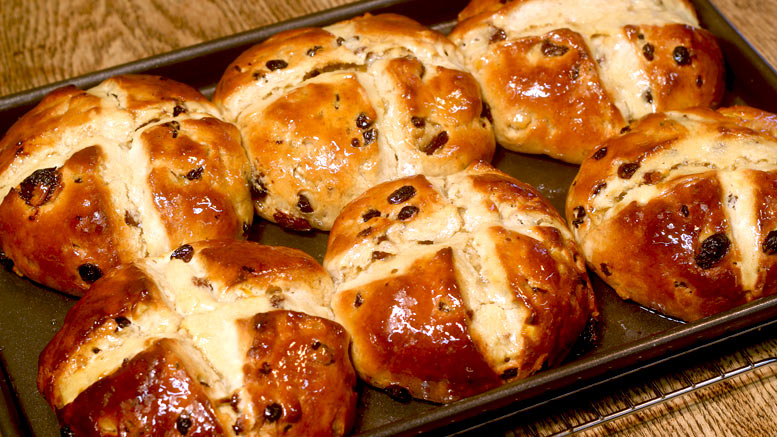 Even before the medieval period, marking breads, buns and cakes with the sign of a cross was a common thing for a commercial baker to do. It was done because the cross was said to ward off the evil spirits which could affect the bread and make it go mouldy or stale, (for more on the history see this post The History Of The Hot Cross Bun).

Yet during the 17th century, in many parts of protestant Britain, the practice of marking a cross on baked goods was condemned as ‘Popish’ (Catholic behaviour) and it was stopped. Only buns* made on Good Friday continued to bear a cross, in token of the Crucifixion – see this recipe for Good Friday Buns. *Other regional superstitions and customs saw the continuation of the cross being made in Soul Cakes for All Souls Day, although these customs were not as widespread.

Spiced and toasted Good Friday Buns, or Cross Buns, (becoming more commonly known as Hot Cross Buns) survived Puritan England and have been eaten for breakfast on Good Friday since the late 1600s. While since the 1700s (until relatively recently) they were sold on Good Friday on the streets of the big towns and cities all day long by street sellers crying, “One-a-penny, two-a-penny, hot-cross buns” – [a penny for a larger bun or a penny for two smaller ones] – the price staying the same for over 200 years! something Charles Dickens first pointed out.

In terms of ingredients it must be remembered that this period in the Christian calendar (Easter and Lent) was one of fasting and reflection: “Formerly, a cake was in much request on this day, [Good Friday] called water cakes, composed of flour and water only; but, to compensate for the want of flavour, the tops of the cakes were smeared with turmeric, which made them of a fine yellow colour. These have given way to the sweet crossbuns.” From ‘The Mirror Of Literature’, by Reuben Percy, published 1824.

Below are several easy to follow Victorian recipes taken from original sources.

CROSS-BUNS.—Pick clean a pound and a half of Xante currants ; wash, drain, and dry them; spreading them on a large flat dish, placed in a slanting position near the fire or in the sun. When they are perfectly dry, dredge them thickly with flour to prevent their sinking or clodding in the cakes. Sift into a deep pan two pounds of fine flour, and mix thoroughly with it a tablespoonful of powdered cinnamon, (or of mixed nutmeg and cinnamon,) and half a pound of powdered white sugar. Cut up half a pound of the best fresh butter in half a pint of rich milk. Warm it till the butter is quite soft, but not till it melts.

While warm, stir into the milk and butter two wine-glasses (or a jill) of strong fresh yeast. Make a hole in the centre of the pan of flour; pour in the mixed liquid; then, with a spoon or a broad knife, mix the flour gradually in; beginning round the edge of the hole. Proceed thus till you have the entire mass of ingredients thoroughly incorporated; stirring it hard as you go on. Cover the pan with a clean flannel or a thick towel, and set it in a warm place near the fire to rise.

When it has risen well, and the surface of the dough is cracked all over, mix in a small tea-spoonful of soda, dissolved; flour your paste-board; divide the dough into equal portions, and mixing in the currants, knead it into round cakes about the size of a small saucer. Place them on a large flat dish, cover them, and set them again in a warm place for about half an hour.

Then butter some square tin or iron baking-pans ; transfer the buns to them; and brush each bun lightly over with a glazing of beaten white of eggs, sweetened with a little sugar. Then, with the back of a knife, mark each bun with a cross, deeply indented in the dough, and extending entirely from one edge to another. Let the oven be quite ready; set in it the buns; and bake them of a deep brown colour. In England, and in other parts of Europe, it is customary to have hot cross-buns at breakfast on the morning of Good Friday.

Take the butter and dissolve it, then add to it the sugar and eggs, and beat up with a whisk over a gas stove to the same heat as your ferment, which would be 90 deg to 95 deg. Weigh out 6 ozs. to 7 oz. for 2d. ones and prove by steam, and bake with heat at 500 deg.

Bun Glazes: 2 oz. sheet gelatine; 1 quart hot water; 1/2 lb. molasses or 1/2 lb. golden syrup: Soak the gelatine in cold water and add to the hot water and treacle. Wash the buns over with it while hot after baking.

Put two pounds and a half of fine flour into a wooden bowl, and set it before the fire to warm; then add half a pound of sifted sugar, some coriander seed, cinnamon and mace powdered fine; melt half a pound of butter in half a pint of milk; when it is as warm as it can bear the finger, mix with it three table spoonsful of very thick yeast, and a little salt; put it to the flour, mix it to a paste, and make the buns as directed in the above receipt … [for common buns … make it into buns, put them on a tin, set them before the fire for a quarter of an hour, cover over with flannel, then brush them with very warm milk, and bake them of a nice brown in a moderate oven] put a cross on the top, not very deep.

The best recipe for making buns, that we know of, is the following :—Rub half a pound of butter thoroughly into three pounds and a half of flour; add half a pound of powdered loaf sugar, three eggs previously well beaten, a pint and three-quarters of new milk gently warmed, and four tablespoonfuls of yeast. Mix the whole, let it rise well, by placing it before the fire, and then add either currants, or powdered caraway seeds, or grated lemon peel, according to the flavour desired. Bake in cheesecake tins, and the buns will be exceedingly light.

The following recipes are for the earlier ‘Good Friday Buns’ the more prosaic forerunner to the Hot Cross Bun.

‘Cassell’s Dictionary of Cookery’, By Cassell And Co, Published 1875

Rub a quarter of a pound of butter into two pounds of flour. Add a pinch of salt; then mix a wine-glassful of fresh, thick yeast with a pint and a half of warmed milk, and stir these into the flour till it forms a light batter. Put the batter in a warm place to rise. When sufficiently risen, work into it half a pound of currants, half a nutmeg, grated, and a quarter of an ounce of powdered mace. Knead these well into the dough, make it up into buns, and place them on buttered baking tins. Make a cross on them with the back of a knife, brush a little clarified butter over the top, and let them stand a quarter of an hour before the fire. Bake in a good oven.

Set a ferment with the 3/4lb. yeast, half the milk and water at about 90 degrees, 3 lbs. moist sugar, and add the amount of colour required to give a nice golden tint. Stir into the ferment sufficient flour to make a nice batter, and leave it until it has well dropped. When ready, add the remainder of the ingredients enumerated above, having gently melted the butter upon the oven stock, and make into a nice, tough, springy dough. Leave to prove one hour, then cut back and prove another two hours, when it will be ready to scale. Use enough flour to make nice springy dough. Bake with the heat at 500 deg.

Bun Glazes: 2 oz. sheet gelatine; 1 quart hot water; 1/2 lb. molasses or 1/2 lb. golden syrup: Soak the gelatine in cold water and add to the hot water and treacle. Wash the buns over with it while hot after baking.