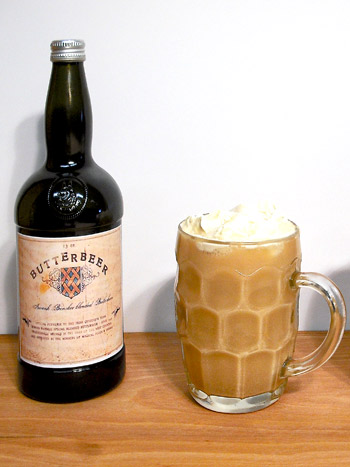 This version of Butterbeer is child (and adult) friendly – a butter beer which could be enjoyed at parties, sleep overs, Halloween and Christmas etc. It is obviously inspired by Harry Potter, and so in our research we tracked down everything JK Rowling had written or said about Butterbeer … importantly she said about the taste of her Butterbeer, “I made it up. I imagine it to taste a little bit like less sickly butterscotch”. And while we keep this mind, there are definitely two things which must go into any Butterbeer, they are butter and beer … whilst also remaining non-alcoholic (child friendly). It might sound contradictory but this is not as hard to do as you would imagine.

Making A Butter Beer: Authentic butterbeer recipes in history use a real-ale (or ‘beer’) and a regular butter, and while this is an acquired taste, we can still make something everyone will love by sticking to these principles … therefore we have to use something called an ‘ale’ or ‘beer’ which is actually non-alcoholic, and instead of raw butter, we need to use a butterscotch syrup, something which JK Rowling said her imagined Butterbeer should taste of.

So along with a home-made butterscotch syrup we need to find a ‘beer’ we can use … a ‘Ginger Ale’ or ‘Ginger Beer’ is perfect … perfect for three reasons: the first reason is that it is importantly called a ‘beer’, the second reason is that they have been making alcoholic and non-alcoholic versions of ginger beer or ginger ale since at least the 1800s, and the third reason why it is perfect is that the oldest actual buttered beere recipe on record from 1588 A.D. uses ground ginger in it. By using both ginger ale or ginger beer and butter in our butterscotch we are making an authentic Butterbeer recipe.

Served chilled this drink is fizzy, creamy and refreshing – tasting of classic butterscotch, with the background warmth of ginger dancing on the tongue. The authentic butterscotch syrup is quick and simple to make and it can be prepared a day or two in advance.

The recipe makes up around 2 litres, therefore scale up the ingredients if you want to make it for more people. Use alcoholic or non-alcoholic ginger beer or ale, depending on who is drinking it and evaporated milk for the butterscotch can be bought or made – making it put 600ml of full fat milk into a saucepan, and on a medium heat, to simmer until it has reduced by one-third (by evaporation) and left to cool.

Add the butter and sugars to a heavy based saucepan and gently heat until everything has melted and dissolved together. Once melted add everything else except the evaporated milk, stir and keep on a gentle heat until everything has mixed. Finally add the evaporated milk (condensed milk is too thick and sweet) – stir, then turn the heat up to a medium heat and simmer for two minutes – we want the mixture to bubble but not boil or burn, stir frequently.

To make classic butterscotch we would normally heat vigorously, but here we do not want to thicken the mixture at all by evaporation, we want it left thin so that it can mix freely with the ‘beer’ element. After two minutes turn off the heat and allow to completely cool. The butterscotch syrup should still be runny and not taste too ‘sweet’ and this is how we want it, the added sugar from the ginger beer and cream soda will balance things out nicely. It will thicken as it cools, but a good stir will loosen it up before use. This can be made up a few days in advance, if it has thickened in the meantime stir in a drop of milk to loosen it. This makes enough butterscotch for two batches of butterbeer.

In a bowl mix together the double cream, the icing sugar and one large tablespoon of the prepared butterscotch recipe. Whisk it until it is thickened, but do not over whip until stiff. The butterscotch will add a lovely subtle taste and colour the cream ever so slightly, making it look like the head of a beer. It tastes so good it is hard to stop yourself licking the spoon.

Into a tall serving jug pour the chilled ginger beer (or ginger ale) then add half of the butterscotch syrup, (stir to make sure it is runny) use a cocktail twizzle stick or long spoon to stir and dissolve one into the other. Then pour on top and mix in the chilled cream soda. Taste and add more butterscotch syrup in if needed.

Into small pint jugs or glasses pour the butterbeer and top off the glass with a large spoonful of the creamy head mixture which will float on top. I suggest serving it in half-pint or third-pint mugs, one half-pint serving is perfect …

If you have some old fashioned beer bottles, or have bought some nicely shaped glass bottles of ginger beer you can make some Butterbeer labels to stick on them and scatter them around. And the remaining butterscotch syrup can be used to make more butterbeer or poured over vanilla ice cream.

Note on buying / making Ginger Beer: You can make your own ginger beer from this Welsh Victorian recipe – Ginger Beer – while those wanting to buy a non-alcoholic Ginger Ale or Ginger Beer it is relatively straight forward in the UK, USA, Canada etc. and other countries. Walking into a small supermarket I saw seven different makes and manufacturers of ‘Ginger Beer’ or ‘Ginger Ale’ in the soft drinks isle, both in cans and bottles. In the wines and spirits aisle I also found a couple of alcoholic versions of Ginger Beer. In other words you can make the same recipe for grown ups and children. We only want the background taste of ginger beer, so we are also adding in ‘Cream Soda’, a carbonated drink flavoured with vanilla, also readily and easily available in the supermarket soft drinks aisle.