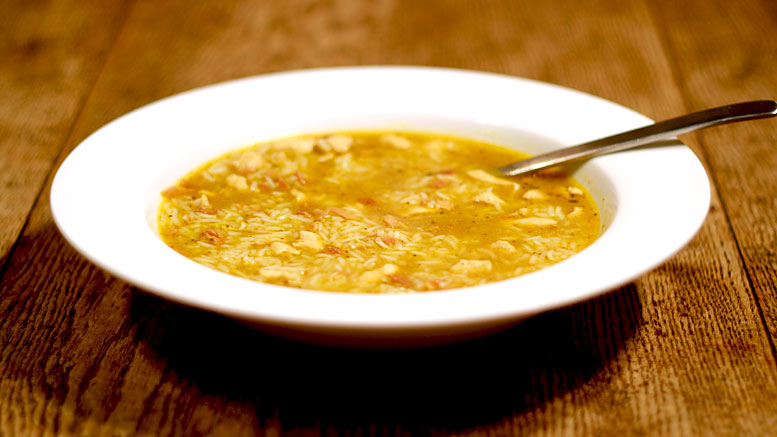 Mulligatawny soup, or as this recipe calls it, ‘Malecotony Soup’, was a very fashionable Victorian soup in England; while today a mulligatawny soup is considered a ‘winter-warmer’. It has its origins in Southern India, deriving it’s name from the Tamil, ‘milagutannir’, meaning pepper-water.

In Victorian England a basic ‘peppered water’ was flavoured with various other ingredients, then the soup was served with side bowls of cooked rice, lime wedges, grated coconut, snippets of fried bacon, quartered hard-boiled eggs and sliced chillies. You helped yourself to what you wanted, making it a meal in itself. Today it is common to make the soup and pour it into bowls before spooning in some freshly steamed or boiled white rice to eat with it, not quite a curry, not quite a soup …

Note on making the soup: In the original recipe the ham it seems is sieved out, in this recipe boiled ham is added after the sieving and is retained, (this is the only alteration to the recipe, and you can of course follow the original directions and put the ham in first then sieve it out with the onions). The chicken for use in a modern kitchen is gently fried before adding, to make sure it is cooked through (in Victorian times very often left over cooked and roasted meats were added to soups as a way of using them up). It is worth taking the extra effort and time to make sure both the boiled ham and chicken are chopped up quite small; and if making this soup after Christmas, as a winter warmer, make it with left over Turkey.

Put a large, heavy based saucepan on a low heat. Add in the chicken stock, vegetable stock and water. To this add the ground mace and allspice, the whole cloves, and the dried thyme, basil and marjoram. Stir in the herbs and spices as the broth warms through. Then add to this the slices of onion. Put a lid on the saucepan and leave on a gentle simmer for twenty minutes.

In a smaller saucepan add the butter and gently melt it. Once it has melted stir in the curry powder and the flour. Stir and cook this out for about two minutes on a low heat. Make sure there are no lumps in this curry paste as you stir and mix.

Once the broth has warmed completely through, (after twenty minutes) stir in the butter, flour and curry powder from the smaller saucepan. Once stirred in put the lid back on the saucepan and leave on a gentle simmer for another forty minutes – stir occasionally.

After 40 minutes strain the soup through a fine mesh sieve into a bowl to catch all the whole spices, onions, lumps and larger herbs etc. which can then be discarded. Clean the saucepan out and return the sieved soup on to a gentle simmer and add in the boiled ham (chopped small).

In a frying pan add 20g of butter, turn up the heat and fry the chicken (chopped small) and chopped garlic, once the chicken is cooked through and starts to brown (the chicken does not need much colour) turn off the heat and squeeze over the juice of 1/2 a lemon. Add all the frying pan contents to the Malecotony Soup, stir and put the the saucepan on, without the lid, for a further thirty or forty minutes at a medium simmer to evaporate some of the liquid in the broth and intensify the flavours.

At this point, if serving straight away, start to boil or steam the rice … however, it is recommended that the Mulligatawny soup is cooked for thirty or forty minutes, then left to cool before the saucepan is covered and put in the fridge to mellow overnight and be re-heated and served the next day.

Serving: Pour the soup into a soup tureen or individual bowls and serve the Malecotony / Mulligatawny Soup with boiled or steamed rice (which people can add in to the soup to the amount they want) and optionally a few side dishes.

Tasting notes: modern Mulligatawny’s often use cream as an ingredient, influenced by most modern curries, here though the original name of ‘pepper-water’ is still valid with this authentic recipe; by using curry powder, ground spices and dried herbs (and eating it straight away) the soup is a little harsh, being salty, peppery and abrasive … however, as with the excellent advice when making any curry, if it is left covered in the fridge overnight the soup transforms into a much more pleasing and much more rounded entity. I would recommend this soup be re-heated the day after making it, (when you boil the rice) – in short, it needs 24 hours to mellow into a very fine and thoroughly enjoyable original Mulligatawny.

This particular recipe is from Disraeli’s own study, dating from the mid 1800s, it is in either his wife’s handwriting or his house-keeper’s. Benjamin Disraeli was the 1st Earl of Beaconsfield, KG, PC, FRS, (21 December 1804 – 19 April 1881). He was a British Prime Minister, (a favourite of Queen Victoria) a parliamentarian, a Conservative statesman and literary figure. He served in government for three decades, twice as Prime Minister.

Disraeli’s Malecotony Soup – An Original Recipe From The Mid 1800s

“To two Quarts of good Broth, add a little ham, some Allspice, Mace, Cloves, Thyme, Marjoram, Basil and Onions. Boil all these together for one hour adding two tablespoons of Curry powder with a very little flour and butter. Pass it all throu’ a Sieve and add to it a little Chicken cut in small pieces with a little Garlic and Lemon. Boil it half an Hour which will be sufficient to dress the Chicken. Rice must be boiled very dry to eat with it – one pint of Patna Rice should be boiled in just one pint of water. When it has boiled up, it should be put at a distance from the fire (not to burn) and being covered close up, the steam will finish doing it.”