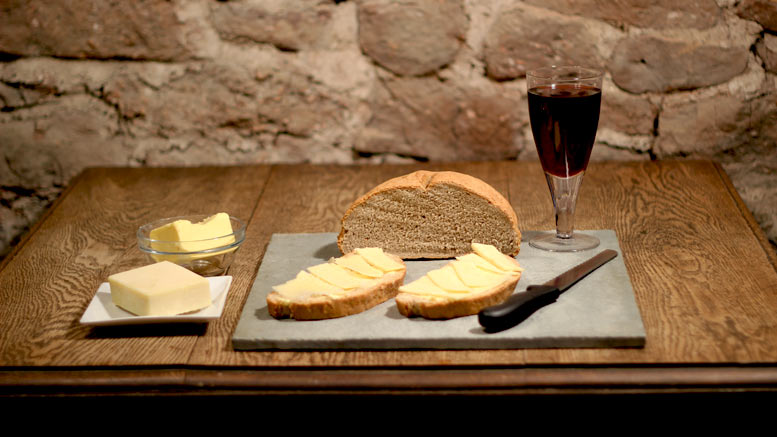 Manchet Breads were some of the best quality leaven breads eaten in Medieval and Tudor Britain. Yet bread like this, made of double boulted (sieved through a cloth) stoneground wheat was always the exception. For much of Britain’s history most bread baked was commonly made from a mixture of coarser flour, made from various grains like rye and barley.

This mixed flour bread, called a Maslin Bread, fed the lowest classes in Medieval society, and also made the trencher’s, (bread plates) used in feasts to eat food off of. However, for the privileged few, the very finest wheaten Manchet’s, or Pandemain (lord’s bread) were baked. Yet it also needs to be remembered that Medieval milling and boulting methods were never wholly successful in removing all of the bran from the ground wheat grain, even the best flour produced was an ‘off-white’ flour, rather than the pure white flour produced today by modern industrial roller milling and boulting methods.

Even so, this whiter manchet flour was desired by the rich upper classes because it made a lighter loaf, of finer texture. It was also far more expensive than mixed grain breads because it involved additional costs and labour and because a proportion of the grain (the larger bran particles etc.) was discarded in the boulting process, so that more grain was needed to produce the same amount of flour. Therefore this whiter, finer bread was a status symbol for those who could afford it.

Active Dried Yeast: In a small bowl or jug pour in half the warm water, (250ml) dissolve in the sugar, and sprinkle in the yeast and stir it thoroughly with a plastic or wooden spoon. Leave to sit for 7 to 10 minutes in a warm place to allow the yeast to start to work. Check occasionally to see if the yeast is rising and frothing.

After about 4–5 minutes, it will have a creamy and slightly frothy appearance on top. Do not allow the yeast (barm) to sit longer than 12 minutes before using, leaving it too long will exhaust the yeast before it is in the dough. When ready, stir and pour in all the remaining warm water, 250ml.

Fresh Yeast: You need twice as much fresh yeast as dried yeast and you must use it in half the time after activating it. Make in exactly the same way as above.

Into a large mixing bowl sieve in both types of flours after weighing them out, using a medium meshed sieve. If you are using 650g of an 80% extraction rate bread flour from an artisan miller you do not have to sieve the flour. Sprinkle in the ground sea salt – then with your fingers make sure you mix the ground sea salt in with the flour, so that it does not interfere with the yeast when added. Make a well in the centre of the flour.

By sieving the two flours you will aerate the 500g of white bread flour and sieve out about 50g of the largest wholemeal bran particles from the 200g of wholemeal flour – leaving about 650g of usable flour in total.

When the yeast is fully activated (7 to 10 minutes) add the yeast water (barm) into the well made in the flour and bring the flour and water together into a dough with a wooden spoon.

Add some more plain white bread flour (if needed) until you form a firm dough which you can knead, it should still be on the ’sticky’ side, but not so that it is difficult to remove from the bowl. You are looking for it to be springy and elastic. Take the dough out of the bowl and onto a flat floured work surface.

Start kneading the dough to make your Manchet Bread for about 7 minutes. Kneading dough is a ‘push-pull’ technique to break the gluten and starches down in the flour. 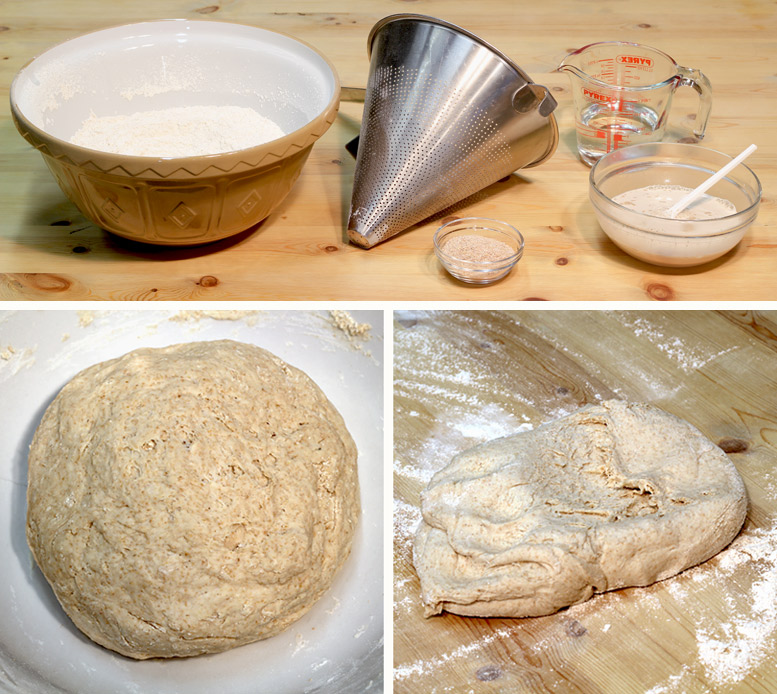 Making The Bread Dough For The Manchet Bread

If sticking to the work surface or the dough is a little wet sprinkle over a little extra flour, it will probably need a few casts of extra flour over the 7 minutes, but do not over do it as too much extra flour will make the bread tough.

When ready it will become satiny and elastic, and when pressed with a finger tip the indentation in the dough will rise back out. Form the dough into a large ball, place it back in the floured bowl, cover with a clean, light cloth in a warm room until the bread dough has almost doubled in size – this could take up to 2 to 3 hours (depending on the temperature of the room).

After the dough has almost doubled in size, knock it back, this means to punch it once to remove most of the air out of it. Remove the dough, and gently knead it once more between your hands for two minutes.

Shape the dough into a ball and place on a greased non-stick baking tray, or a traditional bread baking stone. Important: Leave to rise once more for a further 35 to 45 minutes (this is called the second rise).

After the second rise use a sharp knife to cut a line into the top – not too deep or long, about 4cm by 6cm, and don’t depress the dough too much when making it. 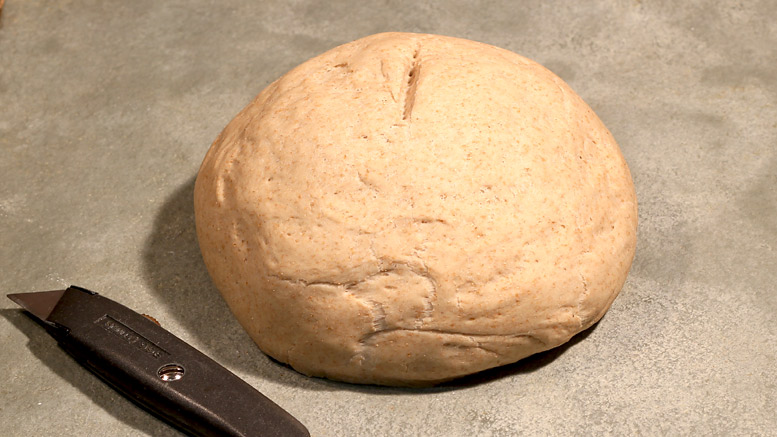 Place the oven tray or baking stone into the pre-heated oven and bake for 10 minutes, then reduce the temperature to 200°C and cook for a further 40min, or until your bread looks nicely browned and sounds hollow when tapped. Remove the Manchet Bread and leave to cool for an hour. Eat within 36 hours and keep the bread covered or in a bread tin.