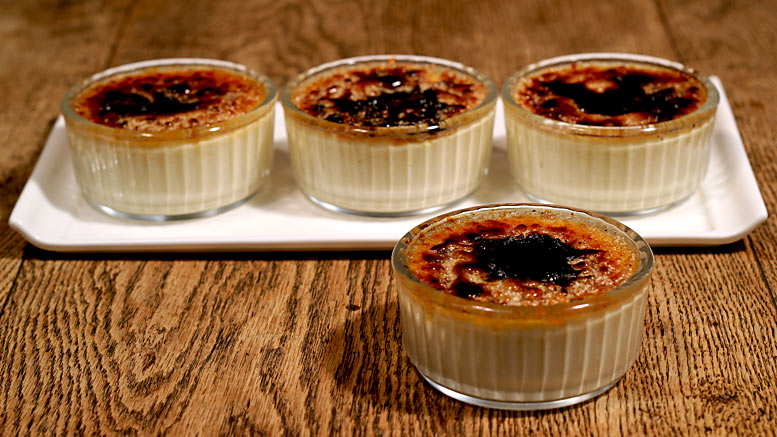 Cambridge Burnt Cream, (or Trinity Cream) has been served at Trinity College Cambridge (University of Cambridge) since the very early 1600s (that we know of). Therefore, it is a nonsense that the French ‘invented’ burnt cream in the modern era, this misconception has occurred because the French translation ‘creme brulee’ came into vogue in English recipe books, in the late 1800s, causing the popular modern belief that it is a uniquely French dish, even though it has been around in Britain for centuries.

Origins of the Dish: There are several compelling and competing claims for the origins of Burnt Cream. The French chef, Massialot, in 1691 references the dish for the first time in a recipe, although Trinity College Cambridge have earlier records of it being served in 1630, but not the original recipe – and to complicate things in Massialot’s second edition of ‘Le Cuisinier royal et bourgeois’, it was renamed ‘crème anglaise’ – English cream. Whatever the origins it is a very simple dish using cream and egg yolks, which then has a thick, crunchy sugar (caramelised) glaze on top. Sometimes it is the simplest of dishes which give the greatest of pleasures.

Special Equipment: A blow torch (although not essential)

I find it useful to put a clean T-towel, or similar, on the work surface to catch any drips when pouring the cream mixture back and forth from the saucepan, bowl and jug etc.

Separate the egg yolks into a large mixing bowl (use the egg whites in a different recipe) and add the 100g of brown sugar. Whisk together until the yolks and sugar have become creamy.

In a heavy bottomed saucepan, ‘scald the cream‘: this means without stirring heat the cream and milk to the point where tiny bubbles form around the edges, and a bit of a skin forms on the surface, but do not let it boil. When the cream and milk gets to this stage, take the saucepan off the heat and quickly whisk the scalded cream and milk into the mixing bowl, with the whipped sugar and egg yolks: always whisking vigorously to stop the eggs scrambling and separating.

The sugar will dissolve in the hot milk and cream in the bowl, then pour this whisked mixture back into the saucepan (add in a little ground nutmeg or cinnamon at this point if you want to flavour the cream).

Heat through for five minutes, on a medium heat, stirring constantly, until the cream can thinly coat the back of a spoon. Then pass this cream mixture through a fine sieve into a jug or bowl, to remove any large clumps that may have developed.

Using a deep sided baking tray or tin take four shallow ramekin dishes (for individual portions) or traditionally use one large oven proof dish (to serve from) and put them into the tray. Ladle or pour the cream mixture into the ramekins. Pour boiling water into the tray until the hot water is half way up around the sides of the ramekins, creating a hot water bath.

Place this tray into the oven for 40 minutes at 150C or until the cream sets.

Do not overcook the cream as the texture will become too firm, rather than the desired creamy consistency – it needs to still retain a slight wobble. To check the cream to see if it is cooked, stick a toothpick in the centre. If it comes out clean then cooking is complete, if it comes out wet then cook for another 10 minutes and check again.

Remove the ramekins from the oven and the water bath then allow them to cool, then place them in the fridge to chill.

Once chilled for an hour set the grill to a very hot temperature if you do not own a blow-torch.

When the cream is chilled, sprinkle each ramekin with about a tablespoon of brown (Demerara) sugar – use your finger to gently spread the sugar evenly out over the top of each cream. Then using the blow torch melt the sugar (this is where the name burnt cream comes from) until golden to dark brown.

Note: brown (Demerara) sugar is more difficult to melt evenly than finer white, granulated or caster sugar, used in modern recipes, but it is far more traditional, with a better colour and taste.

Repeat this step to your own personal satisfaction, once is fine, but done twice gets a thick crunchy glaze. Without a blow torch you can place the ramekins under the grill and glaze until the sugar melts and turns golden brown, and then repeat.

If the sugar gets too hot and starts to catch and burn remove the heat source and blow on it to stop it – keep the blow torch (or indeed oven grill) at least 8 inches away from the tops of the pots – note: a common blow torch cannot be used effectively at 90 degrees (directly above) so use it at a slight angle.

Do not worry about a slight burnt taste to the sugar, if you take it a little too far, this is part of the recipe, complementing the soft, smooth and creamy texture below it – however if the burning goes too far, once melted together, the thin sugar coating is easy to remove, and then you can start again.

Once the sugar has set hard, serve the Cambridge Burnt Cream (or Trinity Cream) – it should be served while the top is still warm and crunchy, and the cream below is cold – you will need a spoon to crack through the sugar glaze to the cream below.

Flavouring the cream: This is a simple, yet delicious, unflavoured recipe, which would have been served at Cambridge in the 1600s. Modern recipes now call for the inclusion of vanilla in the recipe, either scraping the seeds into the cream before scalding, or adding in vanilla essence – and you can do this if you would like to make what is concidered a ‘classic’ Crème brûlée. However, vanilla really did not enter British recipes to any great extent until the 1800s. As a historic flavouring, if you wish, instead of vanilla, use nutmeg or cinnamon, as recommended by Sir Kenelm Digby in his ‘cream’ recipes of 1669.

Burning The Cream: Although a blow torch is now the standard tool for caramelising the sugar sprinkled on top, in the Tudor period a small round iron disc on a long handle (a salamander) was heated in the fire and then placed on top to caramelise the sugar and ‘burn’ the cream. In Trinity College this took the form of a large iron seal, (the college Coat of Arms) decorating the dessert.

Cooking Tips: it is easy to mistake the simple ingredient list of Cambridge Burnt Cream for something which does not need too much care or attention, the reverse is true; when heating cream and eggs you always need to watch the stages carefully; also try not to skip a step, for example, sieving the mixture always produces a better texture than if you miss it out.