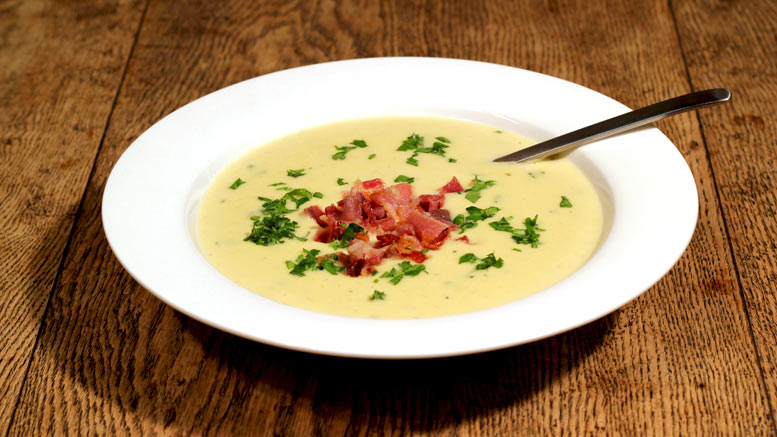 This great tasting regional potato soup comes from Cloughjordan, or Cloch Shiurdáin, meaning “Jordan’s Stone”, a town in North Tipperary in Ireland. Not only is this soup from the 1800s silky, creamy and well seasoned, it is also garnished with very crispy broken-shards of salty bacon – a really wonderful addition to this soup, although if you are vegetarian the soup on its own is worth making. You should also make it with a traditional Irish Soda Bread to enjoy with it, a really quick and easy bread to make.

The original recipe is a 19th Century family one written down by Roberta Colbert, and she recommends either onions or leeks can be used in this Potato Soup. Yet the best thing about this soup is that it requires no effort to make, 15 minutes to initially prep everything, an hour of simmering, and 10 minutes at the end to bring everything together. The soup can also be chilled and kept in the fridge for a couple of days and quickly reheated. Try it, particularly on a wet and rainy cold day, you will not be disappointed …

Cooking Notes: the vegetables are being mashed down or pureed later so they can be chopped up roughly to begin with. Use a fresh vegetable stock if possible, but you can, as I did in these photos, use hot water with a vegetable stock cube, with very little difference in taste. Make sure you get good quality streaky bacon from a local butcher, without too much ‘salt water’ in it, so that it can crisp up.

Peel the potatoes, onions and leeks and chop or slice them small/thin as instructed.

In a large heavy based saucepan melt the butter, then add the onions and leeks and gently fry them in the butter until translucent and soft – about 7 minutes on a gentle heat – stir frequently. Once soft add the slices of potato, season with the sea salt and pepper and fry gently for a few minutes in the butter.

Pour in the milk and vegetable stock, bring up to the boil, then reduce the heat down, and keep the potato soup at a gentle simmer for one hour – with a lid on the saucepan – stir occasionally.

After an hour of gentle simmering there are two methods for dealing with the vegetables:

1. Sieve the liquid into a bowl and retain. Put the solid vegetables back in the saucepan and mash them down into a puree with a potato masher (this is the traditional method) or pass the vegetables through a blender (liquidizer).

2. If you have used a tall saucepan (to stop splashes) just simply use a hand (stick) blender to blend everything down: this method is recommended, as it involves less fuss and mess.

Making The Potato Soup And Frying The Bacon

If removed add the retained liquid back to the pureed vegetables and stir.

Add in the cream, stir it into the potato soup, taste and season with extra sea salt and ground black pepper if needed. Put the soup back on to a gentle heat for ten minutes, (do not boil) stir occasionally.

Fry the bacon under a grill, or in a very hot frying pan, to crisp it up. Once crispy leave it to drain on some kitchen paper towel. When dry cut the fried streaky bacon up into small pieces, or if crispy enough, crumble the bacon up.

Chop the fresh parsley and chives up fine, scatter two-thirds of the herbs into the soup at the last minute (retain a little for a garnish). Stir the herbs in, heat through for two minutes, then ladle the potato soup into bowls, or a soup tureen – when in individual soup bowls sprinkle over a little more fresh parsley and chives for a garnish. Finally scatter over some crispy bacon shards.

Serve the Potato Soup with some thick cut slices of Irish Soda Bread (or a crusty farmhouse loaf) covered in butter.

Melt the butter in a saucepan, add the sliced and peeled onions and cook gently. Do not let them brown. Add the peeled and sliced potatoes, season to taste, then pour over the milk and water or stock. Cover and cook gently for about an hour. It is then sieved and the solids mashed. Add the cream and gently reheat, but do not boil. Serve with freshly chopped chives or parsley on top, and the crisply fried bacon rashers finely broken up with a fork, as a garnish. This soup can also be made with leeks instead of onions.