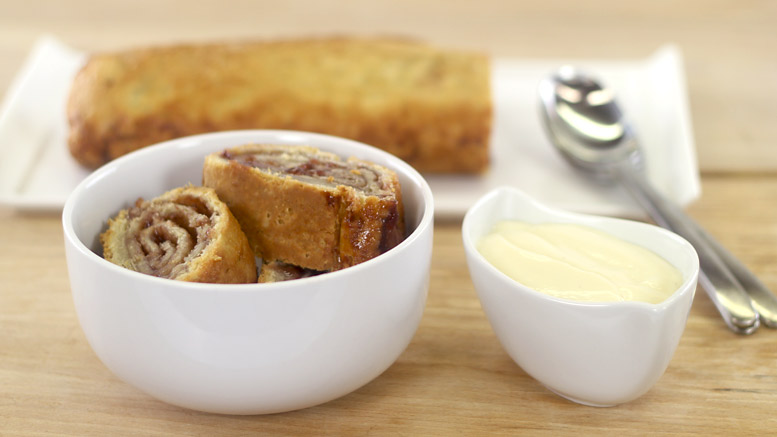 Jam Roly-Poly is considered to be one of the main classic British puddings, which is most often served with a traditional vanilla custard. The recipe given below for Jam Roly-Poly Pudding is one which can be baked in the oven, a modern and quick alternative to the Victorian steaming of a roly-poly, such as Mrs. Beeton’s Roly-Poly Jam Pudding. As a side note, pulling 20 or so first edition cookbooks from our bookshelf in our research library, (from the nineteenth and early twentieth centuries) Jam Roly Poly occurs under various names – from Jam Roll Pudding to just Jam Pudding – but what they all have in common is that the recipe is (almost) always identical, and this recipe is no different.

Serves 5. The ingredients in this recipe can easily be reduced by half to make a smaller jam roly-poly if you wish (22cm x 20cm rectangle) or even doubled to make a very big one.

Tip: use a well floured work surface to roll the suet dough out as you do not want the dough once rolled to stick to the work surface after you have spread the jam on it. Note: you can use fresh or packet suet, and for vegetarians there is a vegetarian type of suet substitute to purchase. You can also use a home-made Raspberry Jam or Strawberry Jam in this recipe.

Sift the flour into a large mixing bowl. Add the baking powder, shredded suet, melted butter and sufficient milk to create a soft, but not sticky, dough (or what is known as a ‘suet paste’). Use a wooden spoon to bring everything together and then finish off with your fingers, mixing everything thoroughly and gently. The dough should be smooth and moist, but not too sticky, add more flour or milk if needed. 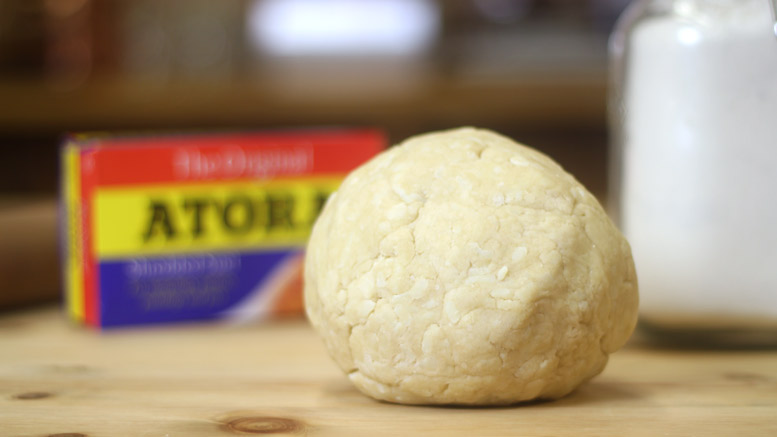 Leave the dough covered in the fridge for twenty minutes. Then turn the dough out onto a floured work area and gently knead for a minute. Once you are happy with the consistency of the ‘suet paste’ re-flour the work area, so nothing will stick, and roll out to a rectangle about 30cm x 48cm at about 5mm thick (quite thin). Just lightly trim the edges neatly with a knife so the edges are about straight.

Warm a little jam in a saucepan or in a bowl in a microwave. Brush the middle of the pastry with the warmed jam, making a thick layer, but leaving a narrow 1 cm border all round the edges. Brush the plain border with a little milk to help seal it. 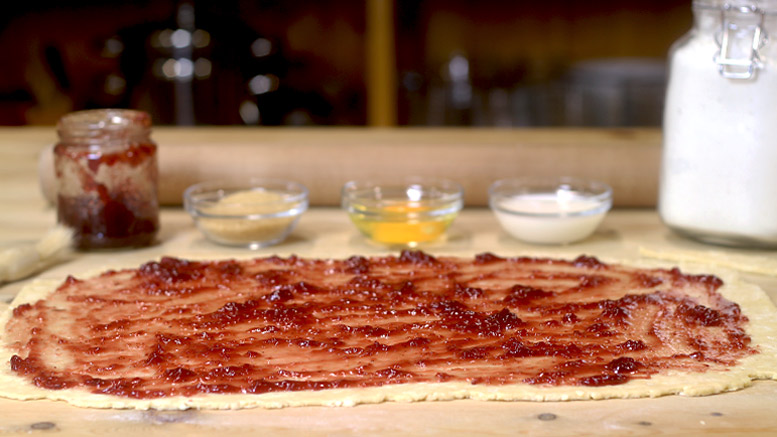 Spread The Jam All Over The Rolled Out Suet-Dough

With the one of the short sides nearest you, roll up the pastry into a log shape (loosely, but neatly, to give the layers in the roll space to expand) and seal the ends well by pinching them and then folding them under. Note: Try to get at least three or four good ‘full’ rolls in. You need to carefully lift, then roll – if you try to just roll then the jam can be ‘pushed’ and ‘squeezed’ away from you, ending up at the other end of the roll. This is why it is essential that the dough is not sticking to the work surface after rolling it out.

Preheat the oven to 200C – optional: some people like to add a roasting tray filled with a few inches of boiling water into the bottom of the oven to keep the air in the oven moist.

To help keep it’s round shape place the jam roly-poly on a rectangle of baking parchment which is a little longer than the roly-poly. To allow room for a little expansion add a ‘pleat’ first into the paper. A pleat is made by folding the paper over on itself, then after several centimetres re-fold it back to it’s full length leaving the folded pleat in place. Grease the baking parchment with a little butter where the roly poly will sit. 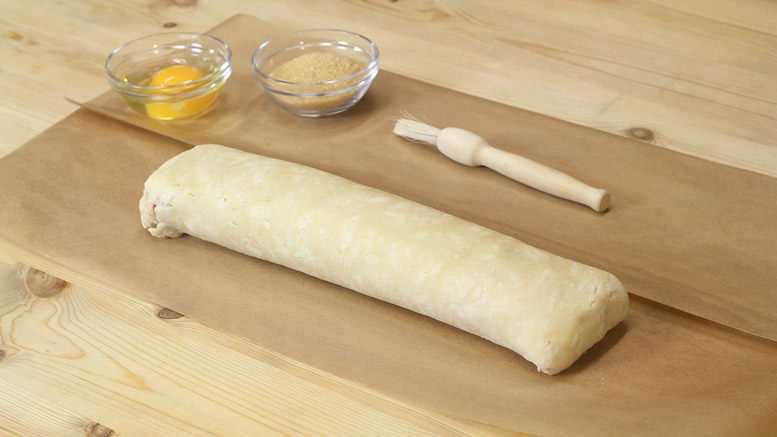 Sit the roly-poly on the parchment seam side down, on the first 1/3rd of the paper closest to you. Brush the roly poly all over neatly with a little beaten egg yolk and sprinkle the top with some brown sugar (not too much). Bring the baking parchment up and around the roly-poly from the front edge, then roll the whole thing over, keeping the round shape, and enclosing the roly-poly in paper.

Twist the ends of the baking parchment to seal – if you are making a very big roly-poly tie off with a little butcher’s string. Place the roly-poly on a baking sheet, with the sealed edge underneath. 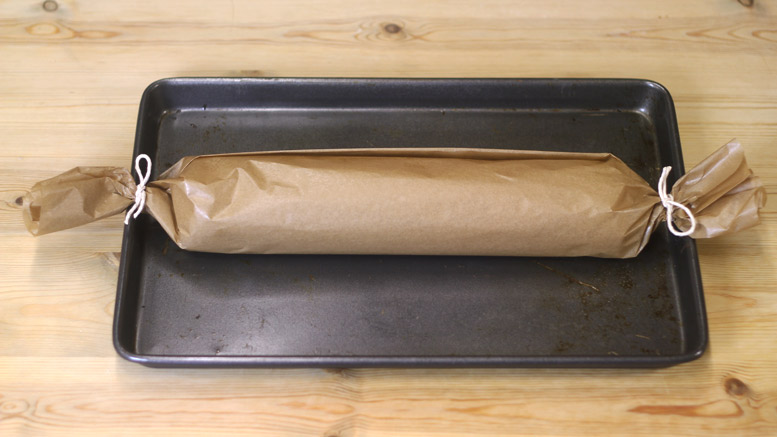 Bake in the oven for 40 to 50 minutes, at 200C, until golden brown. To test the pudding push a metal skewer into the pudding and see that it comes out clean and hot. Do not worry if the roly poly log splits or cracks in places, this is sometimes a characteristic of the baking method, if you want to avoid this, or have a softer pudding, use the older steaming method.

Remove the Jam Roly Poly Pudding from the oven, let it cool for ten minutes, then cut it into thick slices and serve hot with home-made Vanilla Custard.