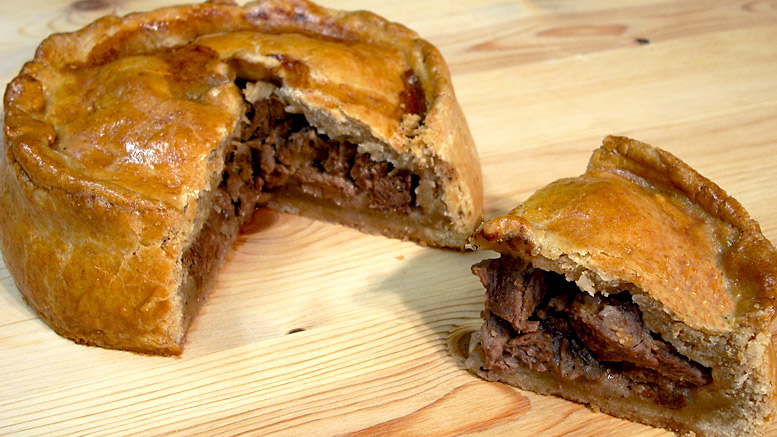 Venyson Y-Bake, (or Venison Pie) is a Medieval meat pie often called a Bakemeat or Bake Metis. It usually consists of beef, pork, venison, or fowl, or a mixture of those meats. The meat was either broiled or boiled, then either used in small bite-sized chunks, or else reduced to a paste (i-ground) by mashing or ‘mortaring’, and then mixed with other ingredients. This particular medieval venison pie receipt comes from ‘Venyson Y-bake’ from, ‘Two Fifteenth-Century Cookery-Books‘.

Pie pastry or pie crust – essentially a basic ‘pie crust’ is made with just flour and hot water, while a ‘pastry’ is made with the inclusion of fats, i.e. milk, lard, butter, suet or eggs etc. and it is made either hot or cold. In this recipe we will be using a very basic ‘hot-water crust’ pastry made with just lard, a recipe which is actually still used today to make savoury pies. It is mixed with boiling water, and the pie pastry is shaped while still warm, which makes it pliable enough to mould into a ‘hand-raised pie’ which will hold its shape as it cools, and also during the baking.

It is a ‘strong’ pastry, fit to withstand the extra handling that it must receive during the shaping, and also the weight of the pie filling it must hold. To eat the pie crust or not? We are going to make the pies specifically with the medieval instructions, “take faire paast” … “an make fayre lytel cofyns” … “as tender as ye maye” … “& endore with yolks of Eyron”, fully expecting to eat the pastry along with the pie filling.

Tasting notes: the pastry was excellent, and the venison was very mild, and the pepper balanced very well. The ginger was very subtle, and not obtrusive. In all it was an excellent pie and very much to modern tastes and highly recommended.

Take hanches of Venyson, parboile it in faire water and salt; þen take faire paast, and ley there-on þe Venyson y-cutte in pieces as þou wolt have it, and cast vnder hit, and aboue hit, powder of ginger, or peper and salt medylde togidre, And sette hem in An oven, and lete hem bake til þey be ynough.

With the flour for the pastry we need to make a close approximation of the finest medieval flour, (with an 80% extraction rate) by mixing plain and wholemeal flour together. Make sure you sift the flour, it makes for a far better pastry and it also removes the largest bran particles from the wholemeal flour, the size of particles even medieval boulting methods would separate out.

Sift the flour and salt into a bowl, making a well in the centre. Place the water and lard into a saucepan, when the lard has fully melted bring this just up to the boil for a minute or two. Once at the boil remove from the heat, then pour this hot mixture into the centre of the flour. Working very quickly mix with a wooden spoon to bring the flour, lard and hot water into a smooth pastry dough.

Once cooler start to gently knead with your hands to produce a smooth dough which is starting to stiffen a little – add more flour if it is a little sticky and wet. At this stage bring it into a ball and cover the pastry in a bowl – leave to cool for 30 minutes. This hot-water crust pastry must be used whilst still at room-temperature, otherwise it will become brittle and too hard to mould.

Prepare the Venison meat – take 500g of Venison steaks, and boil it in 200ml of lightly salted water, until pink and par-boiled. Drain, reserve some of this water or ‘broth’, and let the venison cool before cutting it up into small pieces (or if you want grinding it or ‘mortaring’ it into mince).

Grind the spices – with a pestle and mortar grind the whole black peppercorns down into a rough powder, add the sea salt and ground ginger and grind and mix together for a minute. Do not skip this step and use ready ground pepper: it is important to grind our own spices as this will flavour the meat and the pie, and we want the freshness of grinding our own peppercorns and the spices well mixed.

Making The Filling – In a mixing bowl mix all the pie filling ingredients together, the chopped venison, salt and freshly ground black pepper, ground ginger and a little of the ‘broth’ and mix thoroughly.

Keep the part of the pastry not being worked on covered to prevent it cooling and hardening before use. Care must be taken during the shaping so that cracks do not appear in the pastry through which the liquid from the pie filling can escape.

We are going to make 2 pies so divide the pastry into 2 equal pieces. Take one of the 2 pastry pieces and tear off a third and put it on the counter top out of the way (this is for the pie lid). Make the larger pastry piece into a ball and place it on the floured counter. Using the palm of your hand push down on the ball of pastry to flatten it into a thick circle.

Using your thumbs and fore-fingers start to pull up the edges of the disc to around 4cm to 6 cm high and flatten the base out further, widening it to around 6cm. This can be in a round or an oval shape and the walls of the pie can be straight up or in at an angle (these are hand made pies so no two are going to be exactly the same).

There is a balance to hand-raising a pie crust, the more you work the pastry, the cooler and stiffer the pastry becomes, so we need to work quickly, but the harder the pastry gets the easier it is to shape.

When you are happy with the shapes of the pies put them on a greased flat oven tray and add in the pie filling. Make a ‘lid’ for the pie by using the palm of your hand to flatten out the remaining pastry into two lids to around 1cm thick; moisten the edges of the cases with egg wash and seal lid and base together at the top by crimping them together with your fingers.

Shaping The Pie Crusts And Filling The Venyson-Y-Bake

When the lids are on and sealed the pies are far more stable and you can then use your hands to go around the pies making a much more round shape etc. cleaning the look of the pie up. Finally egg wash the outside and the top of the pie case with the remaining beaten egg yolk.

Cut a star shape into the centre of the lids to form a vent, lifting up the points. Bake at 200C for 10 minutes, then turn down the oven to 180C for 40 minutes. Tip – check the pies occasionally; if they are browning too fast, (you want a rich golden colour) cover them loosely with foil.

Ten minutes before the end pull the pies out, egg wash the case again and put back in the oven to finish off. When baked remove from the oven and allow to cool. Serve warm or cold.

Posted in All Recipes.
Share
←  NewerFood In The Hobbit
Older  →Henne in Bokenade