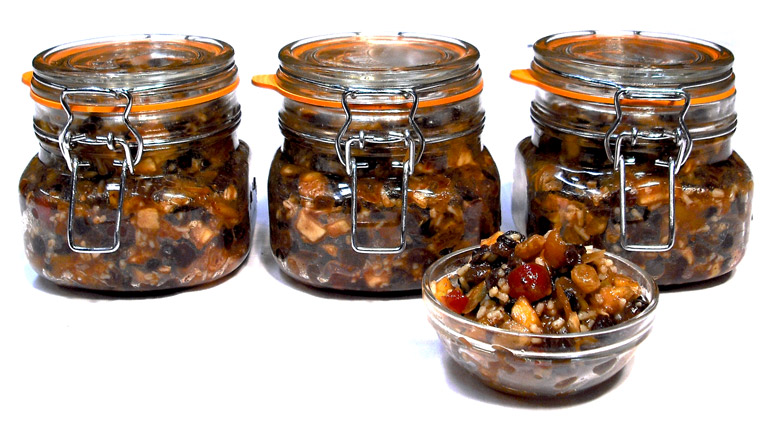 In this article we are going to look at Mincemeat Recipes for Mince Pies, from 1430 A.D. right up to the modern period, considering 9 different mincemeats in all – but first a little history. Pies (or tarts) using dried fruit, spices and ground or minced meat have been written down since the earliest medieval cookery manuscripts. Right from the medieval manuscript, ‘The Forme of Curry’, in 1390 AD, we can see this long association between pies and what we would consider a mincemeat filling – developing from such early recipes as Chewetes On Flesshe Day.

Throughout the Medieval period, and into the Tudor period, the favourite meat used in these small pies (chewettes) was lamb and veal, but by the late 1600’s it had become tongue, or sometimes tripe or pork, (note: by the 1600s recipes were actually using the term mincemeat for the filling and mince pies to describe them) while in the nineteenth century minced beef became the norm.

It was not until the end of the nineteenth century that we saw meat being excluded from the recipes, making the mince pie filling fresh, dried or candied fruits (sweetmeats) and spice only, (aged and preserved in suet, fruit juices and alcohol). Yet even without the meat, with only the ‘sweetmeats’ remaining, the term mincemeat has stuck, and it is still with us today.

So contrary to myth and legend, which is regularly mis-reported every Christmas, there is nothing inherently special about mince pies or their occurrence at winter festivals. The very nature of preserving fruit and meat in winter, coupled with our long history with pies, means that this natural relationship has been with us for a very long time, from very ordinary beginnings … although that does not mean that they cannot taste extraordinarily good.

What did change over time was the shape and size of the mince pies, changing with fashions and periods, and this is where a lot of the myths originate. The Fleur-delis shape, (or a star, leaf, and heart shape) which interlocked, were common shapes for mince pies in the 1600’s, while by the end of the 1800’s larger more ornately decorated pies were recommended. If you have time to research and follow these wonderful mince pie shapes they can make a great centrepiece at the table, be warned though they are time consuming to make, more like an art project than baking, but truly worth persevering with.

Here in this masterclass we are going to consider the various Mincemeat’s used from the Medieval period onwards, from meat and fruit fillings, to all fruit fillings, to flavoured fruit fillings and various alcohols used. There are so many versions now around Christmas that it can be dizzying deciding on which one you should make. But in truth most of the modern mincemeat recipes (for mince pies) are like modern cocktails, there are hundreds of them, and the majority are fads, (or duds) never to become classics.

In this article we will only look at the mincemeat recipes which work, and get the best results. All you have to decide is which recipe or recipes you are going to follow.

Storing & Ageing Mincemeat: The best mincemeat’s are stored and aged, this can be for up to (or over) 12 months, but also ageing for between 4 to 6 months is also fine. This is in order to get a mellow flavour of maturity developing. However, we will also be looking at some shorter term and last minute mincemeat recipes. When filling the sterilized jars with the mincemeat press it down gently with the back of a spoon to get rid of any air pockets and fill the jars right to the top. Store the jars in a cool, dark place … if you are making a recipe with minced meat, without the use of alcohol to preserve, keep the jars in the fridge for up to three or four days before using.

Sterilizing The Storage Jars: Use dry, sterilized jars and pots to store your mincemeat in. Glass ones are always best, with plastic coated metal lids. Sterilize by either (depending on what the jar/pot/lid is made of) heating in an oven, heating in a microwave, immersing in boiling water, hot washing in a dish-washer or using sterilizing tablets dissolved in water. Take particular care when re-using old jars and lids. I always rinse my jars and lids in clean, very hot water, and then heat in an oven for ten minutes at 110C (which helps dry them). Sterilized storage jars means you can keep most mincemeats for well over six months when made.

Alcohol: Brandy is by far the most traditional preserving alcohol to use, but modern recipes for mincemeat have started to add various fruit or nut flavoured alcohols, to enhance the taste of the mincemeat. Port, rum or a bourbon whiskey are great too; and although it is expensive, using an orange flavoured or almond flavoured liqueur in the mincemeat, to those mincemeats which are promoting the taste of orange or almond, can be quite successful.

Note: To get a mellow taste from all the ingredients, rather than just promoting one taste over another, brandy is still the best alcohol to use. The amount of alcohol given in each recipe is for a mincemeat which you intend to age, if you are making the mincemeat up with only a week or even days before use, reduce the amount of alcohol

If Using Suet: Many people only use suet once or twice a year, and almost always from packets, so as such it has become a misunderstood ingredient. Although modern mincemeats have lost their meat, they are not vegetarian. Suet is a hard, white/pink beef (or mutton) fat – found around the loins and kidneys of the animal. So for vegetarians, use a vegeatable suet as a substitute in all of the recipes calling for suet, or make the vegetarian recipe version listed, which calls for no suet to be added. If you have time, rather than using packet suet (which is fine, and which I use in standard recipes) ask your butcher to reserve you some of the finest fresh suet he has, you can dice and shred it at home, it shreds very easily – and you use it in the recipes as directed.

Fresh suet has no other ingredients such as flour etc. added and it will always give you a superior, cleaner taste to your mincemeats. Also your local butcher will probably add it into your weekly shop free of charge, if you are a regular customer; nowadays it is mostly considered a waste animal product, but even only 30 years ago most butchers sold it fresh off the counter for cakes, puddings, mince pies and dumplings etc.

A note about shop-bought mincemeats. The best shop bought mincemeats are expensive for what you get, and you don’t really get that much, the example I am using is a good jar of mincemeat from a supermarket, (used last minute it is fine if you are in a rush) but when you compare the ingredient list to the home-made ones in these pages (which works out far cheaper per jar) there really is no competition in terms of taste.

This is an example of the pretty packaging not really delivering the highest standards that you might wish for, it is too sugary and uses very little alcohol or a real diversity of fruit … sultanas 23%, glace cherries (6%), currants (4%), sugar, apple, raisins (7%) glucose-fructose syrup, port (3%) …. brandy (2.5%) etc. Although it has to be said, this is still one of the better ones to buy.

Making mincemeat is only about a half-an-hour of work, and you control the ingredients, so isn’t it worth making it yourself? Plus they make excellent last minute gifts if you have several in store around the holiday period.

The recipes for mincemeat follow on the next pages